This evening, Andy suddenly made noise upstairs. When Li-Xia went up-stairs, he shouted that he had found Baltasar. When Li-Xia went into his room he showed her that he had found both Baltasar and Lassie, his favourite cuddly toys, that were missing since January 13 in an old school desk standing on his room. Li-Xia had checked it, but apparently he had put them in very deep.

This morning, Annabel broke her right front tooth again while eating some mie noodles. When I arrived home from church I had go with her to a dentist. At the dentist offers, I was informed about the fact that I had to pay cash. So, I ran to the closest cash dispenser to get some cash. When I came back, they were just about to start the treatment, which consisted of clueing the piece pack, as it had been done before. Luckily, this did not turn out as dramatic as when the left front tooth broke on August 24, 2004.

The device with some blinking light, as shown in the image on the right, was mistaken for a bomb last Wednesday in Boston. The device was developed by Interference, Inc as an alternative form of advertizement for the "Aqua Teen Hunger Force" cartoon broadcasted by Cartoon Network. Today it became known that Boston Reaches Settlement in Bomb Scare. Half of the $2 million, the company will pay in "goodwill funds" that will be divided among the agencies for emergency response training and equipment and public outreach. One would say that they really need some training to discern a bunch of blinking lights from a bomb.

This evening, I went alone to the university to play Go. (Annabel has to stay home, because tomorrow she has an important test.) There was a lot of noise in the cafe where we always play. I did not find them there, but in the hall, where there was considerable less noise. Rudi was playing against Taco and Ton against Juri. While I watched the game of Taco and Ton, Edze arrived together with Marin, who came for the first time. Edze suggested that Marin and I would play against each other and play without handicap. It was quite an interesting game, and it looked like Marin was going to win, but when we counted he had 92 points and I 116. It seems, I have found someone of my level again. But it would not surprise me, if he would outgrow me within a few months.

While I drove home, I listened to my favourite radio station SLAMFM. And as often I was thinking about a program to analyse music, to split a song into individual elements. And some how, I got the idea of cooling. The problem is finding a minimal solution that covers everything. In a sense it is much like finding an Exact Cover.

Yesterday, the KNMI (Royal Dutch Metereologic Institute) already issued a weather alarm with respect to heavy snowfall. This morning, it was about three degrees Celsius below zero. Just before half past eleven, I was phoned by the school of Andy, that the taxi busses will leave around twelve, because they don't want the problems of November 25, 2005 to be repeated. Because Li-Xia is away, I had to go home immediately. I arrived home around five past twelve. When Annabel arrived home, she told me that it started to snow a little.

When Andy was brought home around one o'clock, it was snowing a little stronger. Andy did spend some time looking outside, watching the snow.

At the end of the afternoon, there was at most ten centimeter (four inches) of snow. Rush hour was one of the quiets on records. The temperatures had gone up and it started to rain in the evening. I thought that the weather alarm was a little overdone.

Today, I finished a program for finding Smallest 'hard' Exact Cover with one solution. I was a little surprised about how small the smallest solutions were. They are and 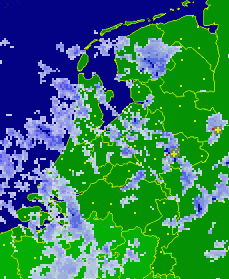 Thunder from a clear sky

At 15:02 this afternoon, I suddenly saw a faint flash while the sun was shining, which was immediately followed by thunder. It was also raining, and when raised the blinds, I noticed a rainbow just above the roof of the building on the otherside of the parking place. And soon thereafter, I noticed the second band, making it a double rainbow. I quickly took a picture. One of my colleagues, who has her room on the otherside of the hall, came in to inform what was that noise about. When we told her it was thunder, she looked at us in disbelieve. However, it was recorded by rain radar. See the yellow cross on the right side of the image shown on the right.

This evening, Annabel and I went to the university to play Go. We were the first to arrive, and it took some time before the others arrived. I was invited by Edze to play a game. We decided on a six stone advance for me. Annabel play against Ton and got a nine stone advance. Their game lasted for one and half our. Several times she captured some stones from Ton. On time even with a snap back that she had already had counted. Nevertheless she lost with 74 points. Ton feels she really got stronger and is probably stronger than his son Titus. At one point I made a mistake in my game against Edze and lost half corner. We analyzed the options and decided to continue (although I already had resigned) after making the correct move. In the end I lost with 10 points. I found that much better than the last time we played.

Ton also told that he with his children was going to European Youth Goe Championships on March 8-11, and ask if we were going. He suggested that Annabel could come with them. Annabel found it a very interesting idea and at home we decided that she would be allowed to go. Of course, we have to apply for a leave from school for her. But that should not be a problem, because the championships are regarded as a top sport event.

Today, we decided that both Annabel and I will go to the European Youth Goe Championships on March 8-11. My mother will come and stay some days with Li-Xia and Andy.

Today is the first day of the year 4704, a pig (boar) year, according to the Chinese calendar. The Chinese are expecting a lot of babies this year, because according some astrologist they think this is the best year in 600 year to get a child.

Today, Li-Xia and I have decided that we are going to Maastricht next week and stay there for two nights in the Van der Valk hotel in Maastricht. We plan to look visit the places where the foto's from the book Maastrich 148 are taken.

This afternoon, I got a phone call from Annabel, while I was in a meeting. I thought she was just phoning about something small, but she told me that her tooth broke of again, like it did two Sundays ago. I made an appointment for hour dentist at four o'clock and went home early to catch Annabel. We arrived a little early and could right go in. The dentist clued the piece again.

In the evening, Annabel and I went to play Go. When we arrived, Vincent, who we had not seen for a long time, was there. I decided to play against him with five stones ahead. In the end I lost with 28 points, after I spoiled a good opportunity to kill a large group of his. Annabel did not play Go.

Today, the new government was officially installed by our Queen. It has been 93 days since the elections. After the election, when it became clear that there were at least three parties required to form a coallition, many people thought that the formation of a new goverment was going to take a long time. It government consists of two large parties, the Chritian Democrats and the Labour Party, and one small party, the ChristianUnion. The ChristianUnion is regarded as a right wing (that is conservative) Christian party. It has been a long time since such a party has been part of the government, and it already has raised some controversion. Of course, the have added some of points to the goverment convenant, such as the statement that civil servant are allowed to refuse to marry a gay couple. This already caused at least one civil servant to be fired in the past. The gay-movement already has stated that they want to make a list of civil servants that refuse to marry gay couples, as they feel that their rights have been violated. Of course, there are enough civil servants willing to marry gay couples. Some people already have been arguing that the ChristianUnion as a small minority party has been pushing there opinions on a majority of the people who do not agree with their opinions. This is a silly argument, because it were the two big parties who allowed them to include these statements. These parties could have selected another party to form a coalition. The vice-minister of the ChristianUnion, André Rouwvoet already has been marked as the most reliable person of the government by an informal poll amongst 22,000 people.

In about two weeks we will vote (indirectly) for the Senate. It would be interesting to see if the parties of the government will be able to hold a majority of the votes in the Senate as well.

Today, Li-Xia and I went to Maastricht, after we dropped Annabel and Andy at the places where they will be staying for the coming days. We decided this last Tuesday. We arrived in Maastricht shortly after noon and immediately started to visit the locations where the photos from the book Maastricht 148 are taken. For the details see the detailed trip report. This months interesting links
Home | January 2007 | March 2007 | Random memories