The Negative Teleology of Hans Jonas

Today, I received the PhD thesis De negatieve teleologie van Hans Jonas (The Negative Teleology of Hans Jonas) of Ton van der Valk (in the form of a PDF). He will defend his thesis on December 18. I was happily surprised when I discovered that he mentions me in the word of thanks, although at first I did not exactly understand why I deserved that honour. Now I understand that it is related to mutual support that we experienced through playing Go and sharing our lives with each other. I am considering to read and grok this thesis in the coming weeks. 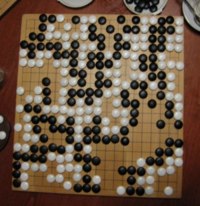 I went to the university to play Go and I was the first to arrived. I read a little in the PhD thesis of Ton of which I have received a paper copy until Rudi arrived. I showed him the thesis. Likewise I did to Taco when he arrived. Rudi suggested that he would play simultaneously against us, just like the last time I played. Again, we decided on an eight stone handicap. I did not make any big mistakes, the biggest being giving away three stones, and it was not very surprising, at least to me, that I won with 41 against 28 points.

In the afternoon, it started to snow a little. The snow was much like tiny hail stones. In the evening there was a thin layer of snow.

We had some more snow during the night and during the day, but still not more than a centimeter of snow. Other parts of the county got far more snow, and the snow caused some serious traffic problems both on the road as on the rails.

The Negative Teleology of Hans Jonas

While traveling to the Ph.D. defence of Ton van de Valk, I finished reading his thesis, with the title De Negatieve Teleology van Hans Jonas (The Negative Teleology of Hans Jonas). I started reading this on December 1. I did not read the English summary and I also did not 'read' the tables of contents of the works of Hans Jonas. I arrived just in time, because I had to take a detour as result of some train not going as a result of the large amounts of snow in the past days. After some questioning, that was able to follow a little, he was awarded a Ph.D. title. Following the reception we took tram ("line 5") to the Cobra Museum. I looked at the work of Piet Ouborg and the "Paris Central / Free City, Free Art / in the Fifties" exhibition. The paintings I liked are: Afterwards we had dinner in Restaurant Harkema and to the drama perfomance "Hannah & Martin" in Frascati theater. This drama performance deals with the secret relationship between Hannah Arendt and Martin Heidegger.

Shortly after eleven, I left from the place of Meindert, where I had stayed during the night, and took tram "lijn 10" to the Leidseplein. From there I walked to the Central Station. I brought a short visit to the New English Bookstore and next visited Selexyz scheltema, where I did not buy anything. I made some small detour before I arrived at the antiquarian bookshop called Straat. I only stayed there very short because the 'owner' of the shop was smoking. Next I went to De Slegte. There I bought German version of the Tractatus Logico-Philosophicus by Ludwig Wittgenstein for 4 euro.

When I arrived at home, I opened the package containing the tree volumes of the auction catalogue of the Bibliotheca Didina et Pinguina, the private book collection of Boudewijn Büch.

This morning there was powder snow and wind, resulting in a small blizzard. In some parts of the country it was worse than in our part.

This morning, the sky was clear and the low sun was putting the roofs in a yellow colour. But it was clear that more snow had fallen from the sky during the night.

Last night we had some more snow, but now the temperature is getting above zero and it looks like the snow is melting. I also felt some drizzle when I went outside this morning. At the end of the day, the snow on the sun facing roofs had completely disappeared.

This morning, it was snowing a little, yet we do not really have a white Christmas, because it is to warm for the snow to stay and the snow that fell in the past week has melted away almost completely.

Update: At my mothers place there was still a lot of snow, and later the KNMI would declare it as an official White Christmas, with 8 and 4 cm of snow on the two days of Christmas in De Bilt.

At the end of the afternoon, Li-Xia and I went into the city biking against the cold wind. We first went to a Chinese shop where we bought some krupuk and "Light Superior Soy Sauce". Next we went to De Slegte where, at 17:37:29, I bought the following two books: We had some döner kebab and falafel at Laila. Afterwards we went to Media Markt where I looked at some fantasy miniseries, such as the Earthsea, which had the name of Urula Le Guin attached to it. When I read her comments, I was happy I did not buy it.

We bought a 1 Watt LED light for the bath room upstairs for € 8.99, which is a good price if you realize that it is expected to last 50,000 hours. Maybe the last light we will buy. Li-Xia noted that the light was still glowing when switched off. I went upstairs and discovered that it indeed does glow. The glowing stops when I take the bulb out and starts immediately when I put it in again. Either some current is leaking or there is some induction current running. But anyway, I do find it strange.

It snowed from the start of the day. At first the snow is not staying everywhere on the ground, probably because the temperature is only just below zero, but by the end of the afternoon it did. The snow is sticking onto the trees and plants, which is a very nice view. This months interesting links Movements