The Good Women of China

This evening, I finished reading the book Verborgen stemmen (The Good Women of China) by Xinran, which I started reading on December 25, 2009. I bought the book on April 5, 2009 from De Slegte for € 2.50. The book contains a number of gripping but also shocking stories from women in China. It tells about a side of China that you do not read about in the official history. Very interesting to read.

In the evening it started to snow again, and the snow everywhere on the ground, but also on the trees and plants. At least a few centimeters of snow.

I received an email from Susan Shaffer, reminding me that today is a palingdrome date. It is indeed for the formats MM/DD/YYYY (01/02/2010) and YYYY.MM.DD (2010.01.02). She also made a suggestion for upside-down dates, which are dates that look the same when read upside-down. The closest upside down year is 1961. All upside-down dates are in the past or the far future. 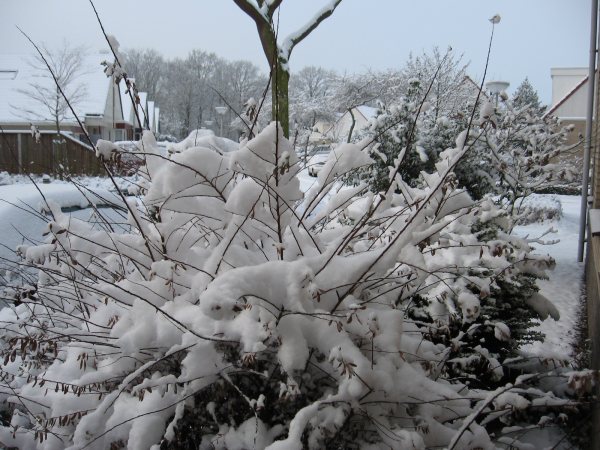 This morning there was about 10 cm (4 inches) of snow outside. Because there was, and still is, no wind, the snow piled high up on the branches of the trees and the plants. I took some pictures this morning.

This morning and also this afternoon, we got a little snow in Enschede. Yesterday evening Amsterdam and the area North of Amsterdam was hit hard by a lot of snow, causing traffic jams that lasted till two o'clock at night and started again at six o'clock this morning. The snow that fell last weekend is still here. It has been a very long time ago that we had such a long period with snow, and it looks like it is not going to be over soon. The biggest problem is that the country is running out off salt.

Yesterday, the KNMI issued a weather alarm for today, stating that it was better to stay inside. The reason for this was a strong wind from the East in combination with heavy snow fall. But this morning there was only a little fresh snow. Nevertheless, I decided that I would go and do some shoppings. It was not as cold as I had expected. But in the afternoon it started to snow till about eight o'clock in the evening. It was very loose snow, which was easily blown away. But still around here it did not cause major problems. In the North of the country more snow fell and the wind also was stronger. It seems that the problems there are much worse.

Some snow fell during the night and also during the morning it snowed with big flakes of snow. But the temperatures are rising and barely above zero, which cause the snow to melt at certain places.

And again it is a palindrome date, the second time this month. This time it is when you write it in the format MM/DD/YY, which gives: 01/11/10.

Last Thursday, I found the book Ingang tot Het Bureau (Entry to The Institute by J.J. Voskuil (which is a summary with page numbers of the seven volume novel by the author) in De Slegte in the new arrivals section. I didn't buy the book, but later that evening, I changed my mind. I thought about passing by the shop on Friday morning, but I didn't. On Saturday, I went to shop again, but did not find the book anymore. When I made some inquiries, I was told that some employee who was not present at the moment, had cleared the new arrivals section and put many books at the right place. This afternoon I went again, and found the said employee. He remembered where he had put the book. He had put it under biographies, the only section that I did not search on Saturday. At 17:45:45, I bought the book for € 5.

Tonight, I went to the university to play Go. When I arrived, Rudi and Araldo where playing and Taco was watching them. I sat across Taco and we greed on a seven stone advance for me. Rudi and Araldo finished earlier and they watched us playing the end game. Of coure, I made some small mistakes, and I thought I was getting behind, and ready to resign. But we played our game till the end, and it turned out, I had lost with one point. I was quite happy with the result. We replayed the first part of the game. 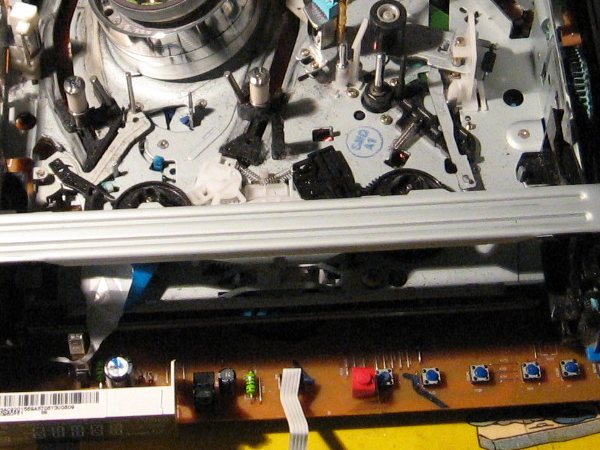 This evening, I set out to repair the play button of our video recorder, which stopped working a few days ago. I opened the lid by taking out three screws, and it was obvious why the button did not work anymore. It had been broken off on one side, which made the arm move to the left (seen from the front) and miss the switch installed on the circuit board. I immediately thought about putting a piece of LEGO on the left to stop it from moving in that direction. I removed the front, which contained the button, to have a better access. I took me a few minutes searching in the attic to find my box with LEGO and about a minute to find the smallest possible piece from the basic sets of stones. With some tape, I put the red piece inside the video recorder. (Then I took a picture.) It did work as designed. And, as usual, it took two attempts to but the thing together, because after the first attempt the tape door would no longer open when the tape was ejected. It is a long time ago I did some hardware hacking

During lunch time, I passed throught the city and I noticed that there was a Winter Sale at bookshop Broekhuis. I could not resist the temptation to go inside and check all the books that where on sale for half price. I found A Concise Chinese-English Dictionary for Lovers by Xiaolu Guo. At 13:22:34, I bought it for € 5.87. Next, I went to bookshop De Slegte where they were also selling books at half price. I looked at some of the books, but could not make up my mind. I went up-stairs to the new arrivals section. There I came across the book Christ the Ethernal Tao by Hieromonk Damascene. At 13:38:56, I bought it for ten Euro. The books that both contain Chinese characters. In the evening, I started reading the first book.

Today, I discovered that Prof. C. Hoede died exactly one year ago when I came across a in memoriam (in Dutch) written by Hajo Broersma. It is he who offered Li-Xia job here at the Discrete Mathematics and Mathematical Programming group at the University of Twente, without which I would never have met her. For an overview of his work on Knowledge Graphs, see the memo 25 Years Development of Knowledge Graph Theory: The Results and The Challenge. I think I first met him the fall of 1982 when he taught a class on Combinatorics (of something like that).

And again it is a palindrome date, the third time this month and the second when you write it in the format MM/DD/YY, which gives: 01/22/10.

A Concise Chinese-English Dictionary for Lovers

Today, I finished reading the book A Concise Chinese-English Dictionary for Lovers by Xiaolu Guo, which I started reading last Thursday after I bought it. It is a novel about a young Chinese girl being send to England by her parents to learn English. Soon she meets an older man with whom she gets a relationship. She carries a dictionary with her. Most of the titles of the chapters in the book, which are often not more than four pages long, are entries taken from the dictionary. It is quite a funny book, but it also deals about some very serious issues and at some points it is even deep.

I also watched the exhibition of Bernard Dorbeck. In the evening, I started to read the book Spellingscarousel about the various reforms of the Dutch spelling rules.

It has been snowing in the past day again. This morning there was a blue clear sky, but also a thin layer of fresh snow. In the evening there was more snow. This evening, I discovered some interesting data on the site of the Royal Netherlands Meteorological Institute which also contained some data about snowfall in various parts of the country. I wrote a program to compare this data with my own observations through the years. This resulted in an interesting list containing a little more than nine hunderd days in which I saw some form of snow. This months interesting links Movements