The cause of Kabuki Syndrome

Yesterday, I discovered that the DNA of Andy, Li-Xia, and I has probably been scanned with the SOLid scanner of Genomic Disorders Nijmegen as part of the search for the gene (or genes) that cause Kabuki Syndrome, which is the syndrome that Andy has been diagnosed with on the basis of a clinical observations. I found the powerpoint presentation Next generation sequencing in research and diagnostics about the technology being used. On the Kabuki Syndrome Network - Bulletin Board I found the following statement, which suggests that a research group of the Dept of Pediatrics of the University of Washington in Seattle has found a candidate gene (Italics mine):

We are currently using a new DNA sequencing technology to look for the gene that causes Kabuki syndrome and need to collect DNA samples from as many Kabuki syndrome families (affected individual and both parents if available) as possible. Testing other families will confirm that we have the correct gene.

I guess if this is true it will be published in some scientic journal and when the genetic defect is known, all other research groups around the world will try to verify the find. There is always the chance that it is a repeat of the Milunsky story.

Today, I found the article The Status of the P Versus NP Problem on the Communications of the ACM website, which gives an informal introduction to the P versus NP problem. I also found the paper Poly-logarithmic independence fools AC0 circuits writen by Mark Braverman which seems somehow to be related to the problem.

When I searched for Geometrical Algebra (which was mentioned in the ACM article), I came across the book Geometric Algebra For Computer Science. One of the authors is Leo Dorst. I saw that he also plays Go, and when I watched the Dorst 1k(w)- Blom 1D commentary by Kang Sun Hee 2p part 1of3 video, I thought I recognized my own voice just right at the start. Later, I realized that it could very well have been me. The video is uploaded on May 24, 2007. On May 20, 2007, I was in Amstelveen joining the one day rapid tournament. I also remember that there was someone recording an analysis held in the bar. Possibly I even looked at this analysis for some time.

I just finished reading the book The Poincaré Conjecture by Donal O'Shea, which I started reading on May 24, the day I borrowed it from Bert. I found it an interesting book, although I have to admit that I do not understand most of the mathematics in the second part of the book. Whereas in the first chapters, this books tries to explain the mathematics in great detail at the level of lay persons, it become harder and harder to follow in the latter chapters. (But maybe this is typical for books like this, because in the book Four Colors Suffice the same happened.) The book also give a lot of background on the people involved. At some points, maybe a little too much. The book also has almost forty pages of notes against two hunderd pages of text. A lot of the notes are source references. Some notes are explainatory and the remaining notes going deeper into the matter. I wonder if it would not have been better to integrate the notes in the text, because now you have to keep your finger at two places of the book all the time.

However, what I found quite disappointing about the book was the treatment of Gregori Perelman. The first chapter starts with that Monday, April 7, 2003, where Perelman talks about his proof at MIT. The book does not say much about the background of Perelman, less than half a page, which is less than many other mathematicians mentioned in the book. Furthermore, the book does not say anything about the reasons why Perelman did not want to recieve the Fields Medal, while he did make some clear statements about it. It only says that Perelman was like Gauss shunning the limelight. It also does not say much about the controversy around the Cao-Zhu paper. It fails to mention that Cao and Zhu wrote a second version in which they acknowledged that there where no gaps in the papers of Perelman and that they had simply not understood what he had written. Where the book does go into great detail to describe how the development of mathematics was influenced by historical events, if makes no mention of the fact that Perelman turned his back on mathematics because he felt that politics has crept in, whereas in the past mathematicians openly discussed their work and where acknowledging each other.

Watching a game of Go

This evening, Li-Xia and I went to the university to watch a game of Go. When we arrived, Rudi and Taco where playing a game, while Huub was watching them. I was not in the mood to play Go, and instead watched the game. Li-Xia also looked from a distances and also read some magazines.

On June 8, 2010, 12:10 pm, a short ceremony to honor the award of the Millennium Prize to Grigoriy Perelman was held at the Institut Océanographique, a short distance from the Institut Henri Poincaré. Perelman did not attend this meeting to listen to laudations and to collect the price. According to Ria Novosti, CMI President James Carlson said that he was waiting for Perelman to decide if he wants the money or not and also said that the money will be sent to a charity foundation if he does not claim it within one year.

In the past days I worked on analyzing the Pallas Athena Protos .pal files. I based this on the never before released C++ version of IParse. I developed a Protos specific scanner. This ZIP file contains all the code, which has been build and tested with Microsoft Visual C++ 6.0 and g++ (GCC) 3.4.4 (cygming special). See the included Readme.txt file for the details.

Today, I went into the city with Li-Xia. After having done some groceries on the open-air market and having looked at some camera's at Media Markt, we visited some bookshops. First we brought a short visit to bookshop "Boekenvoordeel". When we walked across the "Oude Markt" (old market) square, the Soccer World Cup match between the Netherlands and Japan just started. At bookshop De Slegte they gave a 11% discount on all books. I looked at some books, but I did not buy anything. Next we went to bookshop Broekhuis where we first had a look at the exhibition on the third floor. I looked at some books by Tijn Touber about enlightenment, but did not buy any. When we walked past bookshop Kruimeltje we saw that it was closed due to the Soccer World Cup match. In the book section of Bijenkorf, I looked at the 50%-off section. First I found Onmisbaar Chinees by Kees and Jan 't Hart (ISBN 9789021434469, € 2.50). It is a dictionary for Dutch people going to the Olympic games in China in 2008. I am going to bring it with me to China. It is quite a funny book, so I decided to buy it. Next I found Dagboek 1967 by Jan Wolkers (ISBN 9789023440406, € 9.25). Then at 14:40 it was announced that the score was 1-0 for the Netherlands. When at 14:56:40, I paid for the two books, I also got the book Onmacht by Charles den Tex (ISBN 9789059651081) as a present because it is the week of the thriller.

This morning, Li-Xia and I got our vaccination shots for our trip to China. We got Havrix 1440 1 ml vaccine against Hepatitis A and Typherix 0.5 ml typhoid against typhoid. Li-Xia also got the last of three DTP (diphtheria, tetanus, and poliomyelitis) shot. She got these because there are no record for her getting these vaccines as a child in China. I had to pay € 222.30, which will be refunded by our healt insurance.

This morning, we went into the city with the four of us. First Annabel and Andy had a haircut at Knip&Go. Next we went to photographer Charles Kuiper. I never went inside his shop, but Annabel had her pass photo taken there once. Quite funny shop. Kind of a mess inside. He was walking on his socks. But when he helped another customer, it was clear that he was very knowledgable. We asked for a portret picture of Annabel and Andy to bring with us when we go to China this summer. The pictures where taken inside a kind of closet with all black walls. He took about three pictures and we looked at them on the computer. He selected one, but I felt that Andy looked slightly up. Then he took another serie of about eight pictures, but non looked really good. Then looking at the pictures, I had to agree with him, the one picture he had selected was the best. I also realized that it was quite typical for Andy to look the way he looked, so, also in that sense it was the best picture.

At a toy shop we bought some Lego toy for the son of my brother-in-law. Annabel found one for which the price had been reduced about 30%. It is quite a big box. I also bought a small digital travel alarm clock by Xiron.

At page 69 of the magazine Kampioen, number 4, april 2010, I found a picture take inside Verkade Fabriek in 's-Hertogenbosch, which shows a wall with colorful tiles. At some moment I got the impression that the tiles with the same colour formed grids running in different directions. When I looked closer, this appeared not to be the case. But it started making me think about the possibility of this. An infinite regular tiling of the grid can be described with the tupple (a, b, c, d, e, f), meaning that for each k and l there is a tile at the coordinate (a+kc+le, b+kd+lf). The question is if there exists combinations of such tupples that cover the infinite grid completely. Of course, there are some trivial combinations, such as the combination existing from the tupple (0,0,1,0,0,1). What, if you apply the restriction that c=f and d=-e and state the values of c and d must be different for all tupples (when divided by their greatest-common-divisor)? Maybe it is only possible with an infinite set of tupples. An interesting puzzle. 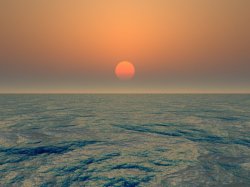 I downloaded picogen and generated my first image by simply following the tutorial and trying out somethings by myself. Some changes caused the program to crash, probably because the height map returned illegal values. Interesting program to play with.

The Infinite grid coverings are maybe not so infinite after all. For every finite subset of infinite regular tilings, there is a finite rectangle in which all of the tilings are repeating. The minimum size of the rectangle can be calculated by taking the smallest-common-multiplier of the repeating sizes of the tilings in the given direction, which relatively simple to calculate. The other way around, given a rectangle, it is also relatively easy to find the whole set of finite regular tilings that 'fit inside' the rectangle. And then one can simply reduce it to an Exact Cover problem. Additional restrictions can also be formulated by extending the Exact Cover with some addition columns and rows. This months interesting links
Home | May 2010 | July 2010 | Random memories