This afternoon, I phoned with Bert to ask if we could visit them to look at their holiday pictures and show our pictures from China. He said that they wanted to go to the movie Inception. After some considerations, we decided to join them. The automatic reservations system reported some error, but when we arrived about half an hour ahead, there where still enough seats. I found Inception an interesting movie, but whether it really deserved a 9.2 as given on IMDB, I doubt. I do not understand why they needed three levels of dreaming for the inception. Also, the student Ariadne, although just hired by Cobb, the expert, soon displays a level of understanding of this type of dreaming that seems far beyond her experience. I even expected the movie to end with a scene where Cobb wakes-up from a dream with her sitting besides him explaining that the dream was needed to help him overcome the death of his wife. But that did not happen. I found the ending of the movie quite strong.

This evening, I finished reading the book Meta Maths: The Quest for Omega by Gregory Chaitin. I started reading this book on July 31, the day I bought the book from bookshop De Slegte for €9.95. I am not very impressed by this book. I think that the publisher should have done some more editing, because this book is not very well written. It looks like the author did not really have a clear goal in mind. There are two appendices of 13 and 31 pages which seems to tell the same story as the main text, but from a slightly different perspective. I am also dissapointed by the lack of mathematics in the book and the intuitive approach that the author takes. At some places Chaitin also sounds quite arrogant, like he made some very shocking mathematicals discoveries, while the book fails to explain these discoveries in a convincing manner. I think that Hofstadter did a much beter job in his Gödel, Escher, Bach.

On page 148, in the section "On Creativity" the author makes mention of "metamath" and I wonderd if he was refering to the Metamath proof checker.

This morning, I got a disk reading error during the booting of our computer named johan. It seems that the hard disk had died, or at least the controller. I played a little with the cables and the connectors, but that did not fix the problem. I think I am going to bring the computer to Media Markt, where I bought it three years ago, to see if I can get it fixed.

NP is not P

Vinay Deolalikar claims that he has proven that NP is not equal to P. The preliminary version of the paper can be found here. Some comments on Richard Liption's Gödel's Lost Letter and P=NP blog.

This afternoon, Andy and I went to Media Markt to have the technical service have a look at our computer johan. They too concluded that the harddisk had failed. I went into the shop and at 16:39:32, I bought a new 320GB harddisk, a Samsung HD322HJ with serialnumber S17AJ90Z441680 for € 59,99. It was the cheapest internal harddisk they were selling, as far as I could see.

After dinner, I installed it in johan after I blew the dust out of the inside and removed the Samsung HD321KJ with serialnumber SOMQJ1KP710274. I just the recovery disk to format the drive and install Windows XP. Next I used the ASUS DVD to install some drivers for the integrated sound and network devices on the motherboard. Finally, I downloaded Firefox and allowed Andy, who had been watching the whole formatting and installation process with much anticipation, to surf the internet for some time before I brought him to bed.

I guess, I will need the coming days to install some more drivers and software. I am also trying to find another Samsung HD321KJ drive in an attempt to revive the harddisk by swapping controllers. But maybe I will first try to simply hook the drive as a second drive to see if I can access it that way, because from what I read on the internet, the message "Disk read error" can also mean that the Master Boot Sector is corrupted or that there is a bad sector in one of the files that are read during the booting process.

Yesterday evening, I connected the old harddisk to johan (replacing the DVD drive) and when I started the computer, it performed a CHKDSK on the drive and made some repairs. After this, I could simply access the drive. Next I tried to boot from this drive, and that too worked without problems. This morning, I swapped the new drive with the old drive and connected the DVD drive again. The computer is still working as before. I think, I keep the new drive, because I am not completely sure that the old drive will continue working without problems. I also have decided to make daily backups to Freecom mobile hard drive of my emails.

This afternoon, Li-Xia and I went into the city for some shoppings. We visited Photo gallery "Objecktief" where we look at the photographs, the prints, of Thea Hillen. She uses a special technique where she prints two, or sometimes even three, negatives on top of each other. We also went to the bookshop of De Bijenkorf. Here I found a book with all the paintings and sculptures of Jan Wolkers. I was happily surprised when I saw that the price of the book had dropped from € 37,95 to € 12,50. At 14:47:20, I bought the book Jan Wolkers: Schilderijen, tekeningen, beelden (ISBN: 9789040096570), which is published by Waanders. At home, I discover that the books has been sold out for some time.

Last week, I exchanged some emails with Jan Wolter about his survey of Paint-by-Number Puzzle Solvers and my Nonogram solver. (Nonogram is one of the alternative names for Paint-by-Number Puzzles.) He tested the version that I published on August 23, 2009, which is a rather experimental version. He mentioned that it could not solve the Knot puzzle, which according to him is line solvable. I was a little surprised by this. I did run the version of the Nonogram solver and discovered that it did solve this puzzle, but also that it this is not immediately clear from the output generated by the program. I also discovered that there is a bug in the printing routine of the program. This program starts with a simple line solver, which did not solve the puzzle. Either this simple line solver is too simple (or has a bug) or his definition of line solvable is different from what I have in mind, which is solvable with repeatedly applied line (row or column) reasoning. I also tested the version of the Nonogram solver (not published) which I wrote for trying to solve his set of 5000 two-color, 30 by 30 puzzles. This solver too did not solve this puzzle. These finding have aroused my interest in Nonogram solvers again, and also made me think about a new implementation. I have informed Jan about my finding, so it is possible that he might update his entry about my solver.

Yesterday, the long awaited press release, Discovered gene causes Kabuki syndrome, came about the likely cause of Kabuki Syndrome, the syndrome Andy has been diagnosed with. Multible defects where found in the MLL2 gene which encodes the MLL2 enzyme. Because with Kabuki Syndrome there is a rather large variability of medical issues, it is interesting to see if there is a correlation between the various defects that where found and the various medical issues. This is definitely a very interesting find.

I looked into the issue with respect to the Knot Nonogram not being solved, while classified as line solvable. I have discovered that there is a serious problem with my line reasoning routine in the Nonogram solver I used last Sunday. I have not figure out whether this has been a case that never has been handled correctly, other whether it concerns a bug that has been introduced in the process of improving the routine. I am quite sure that there is nothing wrong with the definition of line solvable of Jan Wolter and the classification of the Knot Nonogram as being line solvable.

This morning at 11:42:11, I bought Opperlandse taal- & letterkunde by Battus from bookshop De Slegte for € 7.50. This is about a variant of the Dutch language called Upperlandic, which is a wordplay on Netherlandic, which is the literal translation of Nederlands, the Dutch name for Dutch. 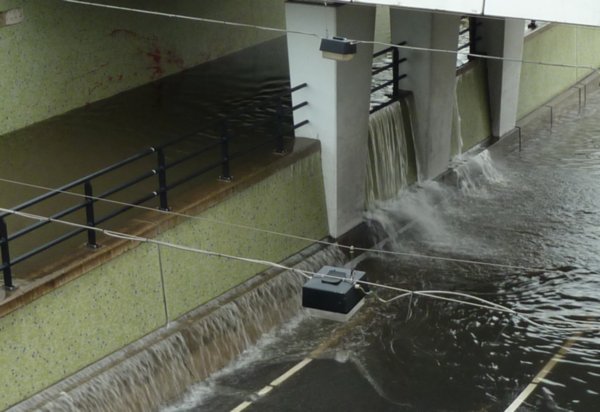 Today, we had some heavy rain. We got about one month of rain in half a day. This resulted in some flooding. The picture on the right shows a waterfall in a tunnel that I usually take. In some part of the trip, I had to use the pavement and at some places even the pavement was flooded. This KML files, which can be viewed with Google Earth, shows the route I took biking to and from my office including some areas in which some flooding occured.

I think I have found some small errors in Supplementary Table 3 of the Exome sequencing identifies MLL2 mutations as a cause of Kabuki syndrome paper. I found these last weekend when developing my MLL2 page. In two cases the value in the "Predicted Amino Acid Change" column seems not to match with the value in the "Mutation" column.

The first case is in kindred 25 for mutation "c.A13580T", which represents a change of an A into a T at location 13580 of the DNA sequence. According to the data given at Homo sapiens myeloid/lymphoid or mixed-lineage leukemia 2 (MLL2), mRNA, the base pairs for the protein at location 4527 is "AAG", which encodes for lysine (K). The given predicted amino acid change for this kindred is "p.K4527X". However, for the given mutation the "AAG" sequences is changed into "ATG", which encodes for asparagine (M) according to the Standard Code, and not for a stop sequence, as represented by the "X". It seems that the predicted amino acid change should have been "p.K4527M". Note that if the mutation would have occured at location 13579, the sequence "AAG" would have been changed into "TAG", which indeed is a stop sequence. Also in case the sequence would have been "AAA", the only other sequence that encodes for lysine, a mutation at location 13580 would also not have given a stop sequence, because "ATA" encodes for isoleucine (I).

The second case is in kindred 50 for mutation "c.1324delC", which stands for a deletion of an C at location 1324. At that location there starts a sequence of five C's. So, actually, the delection could also have been in one of the next four locations. The given predicted amino acid change for this kindred is "p.P442HfsX487". And although the matching sequence "CCC" for location 442 in the protein does encode for proline (P) it does not change with the deletion of an C at location 1324. However, the sequence "CCA" for location 443 does change into "CAC", which encodes for histidine (H). It seems that the prediced amino acid change should have started with "p.P443HfsX".

I have tried to contact the authors and informed them about my findings.