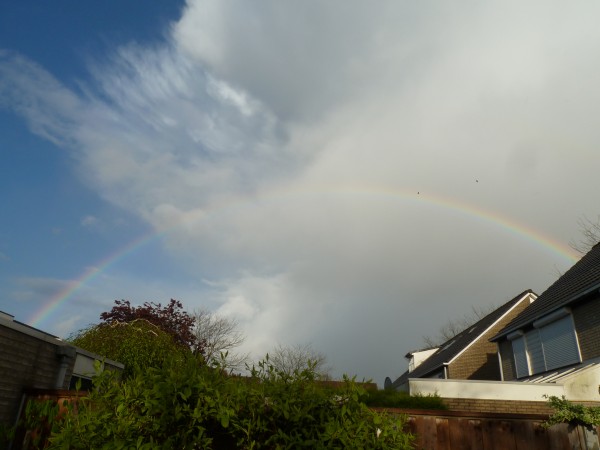 This afternoon, it was already rainbow weather. Around 18:50, we saw the rain blow along the window outside. Five minutes later, the sun started to shine again, and Annabel went outside to find out that it was still raining a little bit. She also noticed a rainbow, and I went outside as well. I took several pictures, also a close-up. The sky cleared-up, and the rainbow disappeared.

At 13:48, I bought the following three books from bookshop Broekhuis from the book sale that is being held in the former Polare bookshop with a 50% discount from the original price: 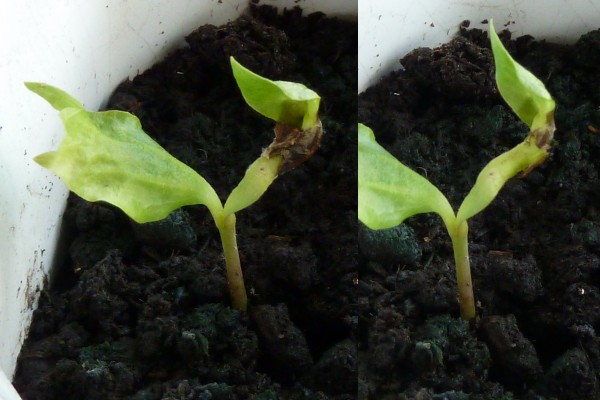 Here a picture of our little magnolia bush. It is barely one 1 cm tall, with only two small leaves. This morning, I have tried to remove the seed that one of the leaves grew through (instead of pushing it out), but I did not succeed completely, because it was stick to it. I remember that the chestnut plant grew much faster. There is a very thin branch coming from the middle of the two leaves, so maybe it will grow taller this year. From some short article from a local newspaper, I think this is a Magnolia stellata "Royal Star".

This morning, I went to bookshop Broekhuis where they opened the third and fourth floor with the second hand books from former Polare/De Slegte bookshop on the otherside of the street. The fourth floor, with mainly fiction, was not open yet, but I was allowed to have a quick look. Before, there used to be an exhibition area and some rooms on the third floor. Now the broke away some walls, making the floor look larger and giving it more day light with a window looking out over the square outside. Although they have the same books as before in the other shop, I noticed some books that I had never seen before. One of them being The Night Is Large: Collected Essays by Martin Gardner. I paged through the book, but did not buy it.

Still one month before the former Polare/De Slegte bookshop will close. The number of new books that are being sold with 50% off has increased in the past weeks. It would not surprise me the percentage will be increased and that also the other books will be further reduced in price.

My brother-in-law asked me if I could help him to solve some geocaching riddle. The description (in Dutch) explains that the code is using run-length encoding, but with omitting the values. It suggest that there are two values and the first should be a zero. I wrote the following JavaScript program to solve the riddle:

This produces the following output:

Now you only need to use a binary to ASCII converter to get the answer.

At 11:41:38, I bought three books from bookshop Broekhuis with 62.5% discount. Since yesterday, there is a 25% extra discount. For books that were already discounted with 50% from the original price, this means a 62.5% discount. The books are:

Starting from today, there is an extra discount of 50% on all the books at the former Polare bookshop now part of bookshop Broekhuis. At 10:26, I bought seven books and got one book for free because of Koningsdag. The books are:

Today, I discovered that the first recording for the novel a, A Novel by Andy Warhol, is probably recorded on Friday, August 13, 1965. I concluded this on a remark made by Robert Olivo, on page 17, where he says that he is going to see the Beatles on Wednesday. Around August 1965, The Beatles only stayed for three Wednesdays in America. On the last they flew back to London and on the second they did not meet anyone, except for two girls who jumped out of a helicopter in the pool. On the first Wednesday, they gave a concert in Atlanta. This months interesting links
Home | March 2014 | May 2014