I got the zip bag with the magnolia seeds from the shed, which I put there last year on October 25. I only found two seeds. One already had a little root growing out. I got pot with potting soil and carefully placed the seeds on top. I placed the pot inside and added some water. Lets see what will happen.

Last Friday, the Dutch author Hugo Brandt Corstius died. Although he is mostly known for his newspaper columns, he is, just like Leo Vroman, a scientist and someone knowing how to program. After he studied mathematics, he became the first Dutch computational linguist and got a PhD with his thesis Exercises in Computational Linguistics. In this these, he writes about an algorithm to split Dutch words into syllables, which has been used for many years. Another report in this area is Automatic Translation Between Number Names. He wrote two books in Dutch about computational linguistics: Algebraïsche taalkunde in 1974 and Computer-taalkunde in 1978. He also experimented with programs producing poetry. (I Could not find any example of this or information about the programs he used.) He wrote his progam in Algol 60. He also became famous for his lists of words with certain properties and wrote several books about these.

This afternoon, I took some at bookshop Polare to look through the sale (with an extra 50% off). At 17:11, I bought the following books:

On Thursday, February 28, I bought two secondhand monitors: a Philips 220BW monitor and a HP LP2065 monitor. Last Wednesday at 16:58, I dumped our Samsung SyncMaster 223BW monitor because it would take longer and longer for the backlight to start operating at a normal brightness. Today, I attached the HP monitor to the artwork by Peter Stuycken and I attached the Philips monitor to the lixia computer in my bedroom.

At 12:13, I bought De kreeftkeerking (the translation of Tropic of Cancer into Dutch) by Henry Miller from bookshop Polare for € 1.25.

This morning, I received a copy of Kees van Bohemen, Peter Jansen, Willem Kloppers, Peter Struycken, Aat Verhoog, the catalogue of the opening exhibition of Gallery Studio Lissabon in The Hague. I bought this online for € 10.

At 14:47, I bought Terug naar Oegstgeest by Jan Wolkers from bookshop Polare for € 5.00. Still no news about a possible continuation of the bookshop. Although they made some good sales in the past weeks, there are still no noticable empty spots in the shop. The coming weeks a decision has to be made about the future of the bookshop.

Last week, there was a image on facebook about integer sequence A237707, which is about the number of unit cubes, aligned with a three-dimensional Cartesian mesh, completely within the first octant of a sphere centered at the origin, ordered by increasing radius. Today, I thought about the number of unit cubes that are visible. Just counting the cubes in the image, I found the numbers: 1, 3, 6, 6, 7, 10. Next, I wrote a short program to calculate more numbers. A version of this program in JavaScript is: I have submitted this sequence to the On-Line Encyclopedia of Integer Sequences. Pending acceptance, is has been given the number A239318.

I thought a little more about sequences that I could contribute to the On-Line Encyclopedia of Integer Sequences (OEIS). I thought about the sequences related to Six of six colours on six by six squares. I worked on the program that I used for this and tried to verify it with the sequences in the OEIS. So I looked at the sequences related to Latin squares. But I could not find a match with the sequence the program generated. At first, I thought that there was an error in the program. With some modifications, it could produce sequence A002860: Number of Latin squares of order n and sequence A000479: number of Latin squares of order n with first row 1,2,...,n.. But it did not produce sequence A000315: Number of reduced Latin squares of order n. But when I looked up the definition for reduced Latin squares, I realized that it involves swapping rows and columns as well. My 'normalization' was only 'rotating' the square along the eight symmetry axes of a square. Swapping rows and columns would destroy the property that every combination of 'colours' are exactly four times neighbours. Below a table with the numbers for the various sequences:

At the end of the afternoon, there was a garage sale nearby our company. I bought a Creative SBS260 stereo sound system, a painting made in 1982 by Irma Kuiper (with the text "Waterlandschap 4" Gouache 50/65 on the back) and the following books for € 30 together: 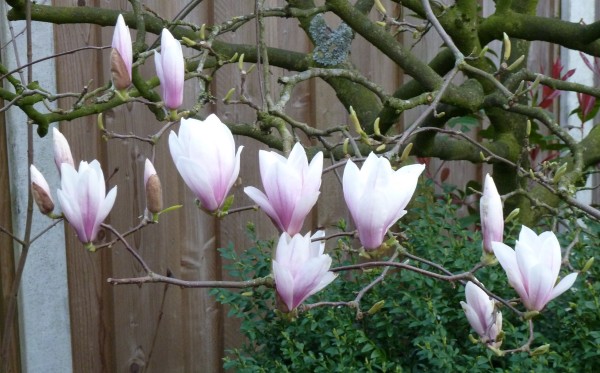 When I came home this afternoon, I took the picture on the right of some flowers in our magnolia in the backgarden. About half of the flowers have opened about half way. Last week Monday, I already thought they would have opened by the end of last week, but that only seems to happen now, I guess because temperatures had dropped again. The weather is going to be nice the coming day, so I expect that many flowers will open soon. Compared to other years, it is a number of weeks earlier that the flowers start to bloom. The experiment with the magnolia seeds, so far, has not lead to any visible results. I am a little worried that the seeds have died because one time I let the soil become too dry. I will give it some weeks, and then I will dig up the seeds. 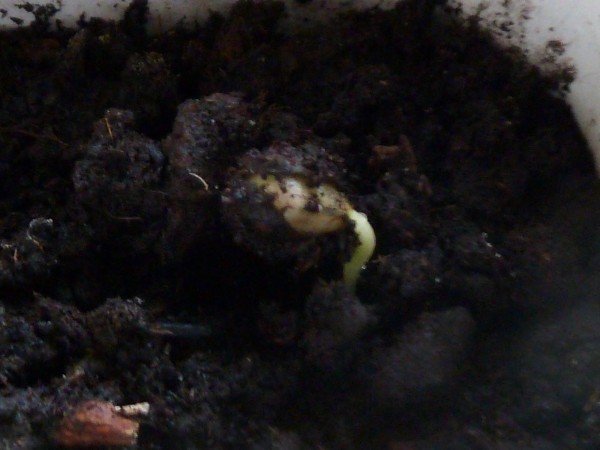 Birth of a magnolia

Honestly, I had given up hope with respect to the magnolia seeds that I planted on the first, but this evening, to my surprise, I saw something come out of the ground. I was a little afraid that it would not work-out because one time, I let the earth dry up. After that I covered the pot with some transparent foil.

Today, came the news that bookshop Polare, before De Slegte, will be taken-over by bookshop Broekhuis on the opposite side of the street. This will include part of the personel and the stock of second-hand books. Starting from next week, the second-hand books will be moved to the third floor of Broekhuis, which now often is used as an exposition room. The purchase and sale of used books will continue on April 15. The Polare shop will close on May 15. I guess that until that time the remaindered books on the first floor will be sold for reduced prices. The recent books will probably also be added to the stock of Broekhuis. I expect that after next week, the Polare shop will start to look quite empty. 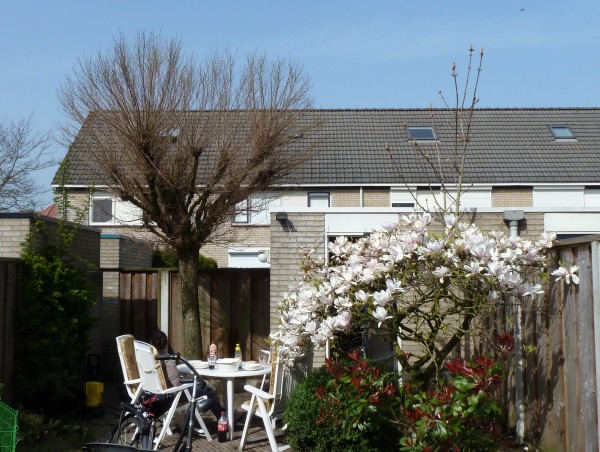 Annabel and her boyfriend spend some time cleaning the back garden. He thought that a little twig behind the garbage containers might be a grapevine. Because it was growing between the pavement and the wall and in a rather dark place, I removed some stones of the pavement and planted it in a different spot. I also replanted three little oak trees from the lawn to another spot. We also cut of the chestnut tree in the back garden. It was almost as high as our willow tree. We cut it to just below the fence. The willow also required pruning. The boyfriend of Annabel suggested that maybe next winter it could be turned into a traditional willow tree by cutting all the branches just above the crown of the tree. That seems to be a good idea. This months interesting links
Home | February 2014 | April 2014