At 13:19, I bought the comic Suske en Wiske: De Stemmenrover by W. Vandersteen (1968 edition) for € 2.00 from bookshop De Slegte. I bought it for Andy, because he wanted it. He always reads the comics when we visit the bookshop.

This evening, just like last night, I tried to locate supernova 2011fe. I think I did see it this time, just for a split second with the Jupiter-21M, which came with our Zenit camera, and attached occular.

Since the release of the first version on June 13, 2010 of the C++ version of IParse, I have continued developing it on irregular intervals. This ZIP file contains all the code, which has been build and tested with Microsoft Visual C++ 6.0 and g++ (GCC) 3.4.4 (cygming special). I performed some refactoring to structure the code better and also to implement two additional parsers. The one being a stack based implementation in case the recursive version encounters a stack-overflow on very large input files. The heap based version does not use recursive method calls, but makes use of stack where each element is equivalent with a recursive method call. (The technique used is similar to the one presented on Machine independent implementation of Cooperative Multi-threading in C.) Also an LL1-parser (recursive) has been included, which can be used for grammars that meet the LL1 requirement. The Protos parser has been included inside IParse. Instead of calling ProtosParser, one now has to call IParse with the command-line parameters "Protos.gr -Protos". Because the Protos grammar is LL1, one could also append the command-line parameter "-LL1Stack".

I think I have found a small typing error in Table 1 of MLL2 Mutation Spectrum in 45 Patients with Kabuki Syndrome paper. I found this typing error when I added the data from that table to my MLL2 page. I think that in row with nr. 16 the number 3250 in the column "AA change" should have been 3258 (an eight changed into a zero).

This morning, I found my tea cup (a Duo Punotti chocolate hazelnut & vanilla pot) like the picture on the right. I was surprised about the dark colour of the tea on the top. A colleague suggested that some parts might float up. But because there are not part with that colour in green tea, and because I don't believe that the float up, I think it is simply discolouring due to oxidation taking place at the surface. 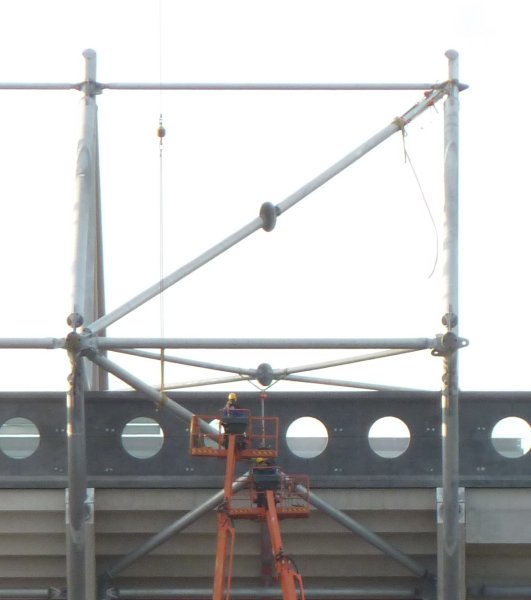 The picture on the right shows how they are installing the last cross bars while rebuilding the roof of the extention of Grolsch Veste, which collapsed on July 7. It seems that the cross bar on the top has not been connected yet, because there are some cables attached to it.

Today, the Kabuki day was held in the Ronald McDonalds Kindervallei in Valkenburg aan de Geul. There I met with two of the authors of MLL2 Mutation Spectrum in 45 Patients with Kabuki Syndrome who affirmed the typing error I found in the paper last Monday. They gave a presentation about their findings with respect to the MLL2 gene.

Last weekend, I came across Binary Puzzle. I strongly suspect that Binary Puzzles are NP-Complete, and I have been thinking about a possible proof, but there are still many loose ends. I suspect that it is possible to transform any logical expression into a Binary Puzzle. Because Binary Puzzle can be transformed into Exact Cover problems, this would proof NP-completeness. This evening, I finished a program for transforming a Binary Puzzle into an Exact Cover problem. I applied this to some of the hardest puzzles on www.binarypuzzle.com to find out that they could be solved by only reductions, which is to be expected for puzzles that can be solved by logical reasoning alone. I adapted my Exact Cover program such that vectors with empty names are not mentioned in the output. In this case vectors are added with a single '1'. 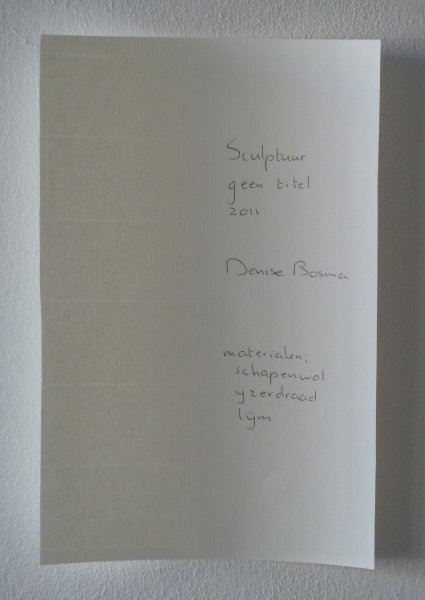 This morning, I went to bookshop Broekhuis. On the third floor, I watched the exhibition of six artist from SKA, which stands for "Stichting voor Kunst en Ateliers", in English: "Collective for Art and Workshops". I took a picture of the caption with an artwork by Denise Bosma, because I found it at least as interesting as the work itself. It says: "Sculpture, no title, 2011, Denise Bosma, materials: sheep wool, iron wire, glue". There also was a table and a chair made from green coated plywood by Mark van Loon. And there where two seatings designed by Irene Bebseler to be used on a wide, slow concrete staircase.

I visited bookshop Broekhuis and went to the third floor to discover that the UT Bookshop had opened. It not really a separate bookshop, but the place where the student of University of Twente can find the books that they need for there courses. There were also three bookcases with books that where on sale for half the price. I found the book What Is a Mind?: An Integrative Introduction to the Philosophy of Mind by Suzanne Cunningham, ISBN:9780872205185. At 12:08, I bought this book for € 9. Next I went to bookshop De Slegte where at 12:26, I bought Lowfat Graphics: A Visual Journey Taking You to 96 Hot Motion Graphic Destinations by Gary Lau, ISBN:9789889705411 for € 19.99. It can hardly be called a book, because it does not look like a regular book, and includes a DVD.

Modelling is an act of making a certain abstraction of reality in order to understand that reality beter and/or in order to communicate certain facts about that reality. Based on personal experiences, I see four levels of abstraction in modelling of information systems. It is not the case that any of these levels is better than any of the others, because each level has it own use. Often, one sees that people move from one level to a deeper level whenever they encounter the limitations of that level.

The first level is, what I would call, the sketch level. The focus here is on drawing (or presenting) a diagram. Often the drawing is informal, without any semantics. When used in presentations the focus is often the appearance of the diagram and images are included to the diagram more lively. This level is good for presentations to lay people or at the initial stages of making an analyzes. But when the complexity grows and a single diagram no longer is sufficient, there is the realisation that the diagram is nothing more than a representation of a deeper model.

The fourth level is, what I would call, the knowledge enginering level. Especially when the data on which the models are based is coming from different sources and has to be combined into a single model, it becomes more and more important to actually know on which 'external' facts a certain fact represented by the semantic model (or shown on a view) is actually based. Not only the result of the analysis needs to be known, but also all the little details it is based on and the analytic rules that have been used. This also becomes important when the contents of the external sources changes over time.

I failed to get a working copy of the DVD with the book Go Black from bookshop De Slegte here in Enschede. Last week, I decided to order a copy of the book through their website for € 7.89 (including shipping). Today, it arrived and I finally could watch the video clip. I found it quite interesting. I made a copy of the DVD on the empty recordable that came with the other book that I bought last month. Now I can return one of the two books. I think I will return the copy I bought for € 2.50, because it is a little damaged. This months interesting links
Home | September 2011 | November 2011 | Random memories