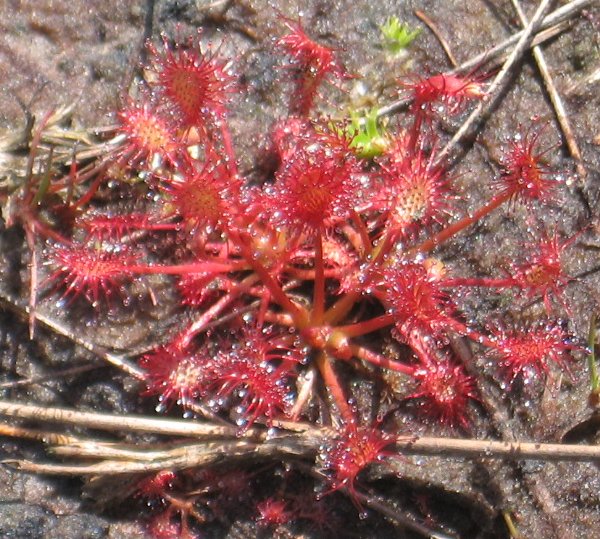 This weekend I am attending an informal Go weekend in Appelscha. Yesterday evening, I played one game against a 6K player with five stones ahead and I won with 45 against 23. Then I also played some Havannah games with Ton, currently one of the strongest players on Little Golum, a turn based playing site. This morning, I went walking with him and someone else through woods, heather, and sand drift. On the way back, Ton noticed that there was sundew on the path we were using. I took some pictures. We walker for more than two hours and about six miles. (See KML file viewable in Google Earth or in Google Maps.) This afternoon, I played a game against Ton with five stones ahead but resigned after I lost a small group. We continue to play anyway and I lost with 54 again 17.

I bought some second hand "Eclipse Shades™" from Rainbow Symphony, Inc distributed by Urania, a public observatory in Belgium. I set my alarm at a quarter past five, only to discover that it was too cloudy to see anything from the transit of Venus.

This evening, I went to the movie: Prometheus. I found it an interesting movie, not much like many the other action packed Science Fiction movies. At some points it even rather slow. The plot is rather complicated, maybe a little too complicated, which makes reason for many plot holes. It is a good movie, but not a match with Alien.

What is a Mind?

This morning, I finished reading What Is a Mind?: An Integrative Introduction to the Philosophy of Mind by Suzanne Cunningham (ISBN:9780872205185), which I started reading October 27, 2011, after I bought the day before from bookshop Broekhuis for € 9 (with 50% off). It took me a long time to finish this book, because it is not a very easy book. I found it interesting, but some chapters left me a little disappointed. Chapter 2 is rather shallow with respect to the treatment of the zombie argument. Chapter 6: "Could a Machine Have a Mind" is mostly about the two approaches to artificial intelligence: symbol-system theories (the linguistic model) and connectionism (neural networks). I had expected some reference to Gödel, Escher, Bach. In the additional resources in the back of the book, it does mention The Mind's I: Fantasies and reflections on self and soul. Chapter 7: "How Do We Link Behavior to Mental States?" does not deal about the question how we can know if others are conscious about ourself, but goes in great length to discus Theory-Theory and Simulation Theory, which to me seems to be two ways of describing the same thing. To me the book is a little too much from a descriptive approach to philosophy, which seems to be more focused on describing the development of ideas than an analytical approach. This however is true for a lot of philosophy.

Last Friday, I got an email from Henk Koppelaar with the question if Jugo Flower puzzle is more complex than the Rubik's Cube. It seems that it has less possible states than the cube, and also the 'movements' can be performed in any order. But that does not necessary mean that it is easier to solve. If I understand it correctly, it means that you have to find a combination of the binary vector 100100001001000 and its fourteen rotations that when added modulo 2 result in the given problem vector. Last Friday, I already wrote some programs, but yesterday evening, I started to think about it with pen and paper. This morning, I discovered the following things. First if we combine the vectors rotated 0 and 8 positions we get: If we combine the vector 2+8 with copies that have been rotated 1 and 2, we get: If we combine this vector with a copy that is 6 rotated, and rotate the result over 3 positions, we find get: This leeds to the interesting observation that the puzzle consist of three independent puzzles, each consisting of five positions that are three places apart. Furthermore because the number of 1-values is always even and various possible rotations, there are in fact only three essential different configurations to deal with: This means that with a little memorization, and some practice, it is relatively easy to solve this puzzle by hand with at most 18 movements. With a simple computer program, it is possible to find solutions with less movements by simply trying out all 2^15 possible combinations.

After yesterday, I started to think if there would be another pattern like for the Jugo Flower which would make more difficult to solve. I started to write a program that could count the average number of moves needed to solve any problem for a given pattern. The first implementation of the program was rather slow and I noticed that it returned many the same values. That made me think about the fact that many patterns are the same, if you rotate them. This morning, I remembered that it is also possible to shuffle a pattern by making steps. For example, the original pattern 100100010010000 can be reshuffled by taking each eleventh (modulo fifteen) value into 101101000000000. I noticed that the average number of moves that is needed to solve any problem is directly related to the number of positions that can be reached from the neutral position, which is actually not that strange. For example the 110001000010000 pattern has four times as many solutions that can be reached than the original pattern. I extended the program also with a check if the puzzle can be split into a number of independent puzzles and how many numbers one would have to memorize. For the original pattern this was fifteen, twice six and once three moves. It appears that for the example pattern can be viewed as five independent puzzles which only require two numbers to be memorized. Which makes it a rather simple puzzle to solve. The more positions can be reached, the more likely that the puzzle consists of independent puzzles. Which makes the patterns that can reach less position more complicated. According to this reasoning, the pattern 101001001000000, which can only reach 1023 different positions form the neutral position, is one of the most interesting patterns. The version of the program and its output that I used find these result.

Three books about Peter Struycken that I had ordered early from two bookshops arrived in the mail. From Jonas Kunstboeken, I received Struycken Structuur<-Elementen 1969-1980 by P. Struycken, catalogue of the exhibition held from December 12, 1980 till January 25, 1981 in Museum Boijmans-van Beuningen in Rotterdam. I bought this for € 7.00. From Antiquariaat Frans Melk, I received Forum, Architectural Quarterly, issue 35/5, June 1992 from Architectura et Amicitia (for € 14.00) and p. struycken. Eight paintings 1988 (for € 15.00). This last one is rather small, at first I thought it was some addition to the other book. Inside it reads: "the end of the comfortable painting", "the series of eight paintings are small sections of an infinite space. in the same place in that space eight different interference patterns were generated, each with three different waves.", and "material autocryl, autoflex and matt varnish on perspex elements on sheet of perspex in a grey-painted steel frame 203x136 cm".

When I arrived at bookshop De Slegte, I noticed two people who were handing out fliers for "Hollandse Helden Weken" ("Dutch Heroes Weeks"), a campain by the bookshop related to the merging with Selexy. Both bookshop chains have been bought by investor ProCures who has plans to join the shops where possible. I am a little afraid that De Slegte in Enschede will also be transformed. Bookshops are going through a difficult time, but De Slegte is still doing fine. In the Netherlands we have a law on fixed book prices, which means that for one year a book cannot be sold under the price established by the publisher. After this year, books are often dumped below the fixed priced, as remaindered books (ramsj in Dutch). De Slegte is selling such books and second hand books. Since about half a year they are also selling the top 100 bestselling books for the fixed price. Today, I bought: I got a € 2.50 reduction by the use of a coupon that I received on Wednesday, May 23, which can be used when you spend at least 15 Euro. I also enlisted for the digital newsletter of Selexyz and De Slegte, which entitled me a free book from ten different books. I selected Groeten van Rottumer plaat (ISBN:9789046806241) in which a hunderd and some people write about their favourite album. At home, I discovered that I already owned a version of Henry en June. Next Monday, I will try to swap it for another book from the sale.

Yesterday, Anand Krishnamoorthi contacted me with respect to Counting Hamiltonian paths. He send me his C++ path counting program (published with permission) based on his solution for the Quora Data Center Challenge puzzle. The program is rather similar to the one that I wrote. Mine constructs a transition matrix between rows, while his calculates the transition over and over again for each following row. I think his program is better if you want to calculate the number of Hamiltonian paths in a square grid, while mine is designed for calculating the sequence with a fixed size and the recurrence equation for it. Once the transition matrix is constructed, calculating the sequence goes very vast. My program is 'breaking down' at about size 12, he wrote today that his program: "can't yet handle more than 18 vertices in a row." (My program took 7 minutes and 37 seconds to calculate sequence for size 12 and about 66 minutes to calculate sequence for size 13.) He also send a reference to the article Exact enumeration of Hamiltonian circuits, walks, and chains in two and three dimensions.

I exchanged two books at bookshop De Slegte for two other books. The books that I handed in are Henry en June, which I bought on Saturday, June 15, and Er was eens een God, which I got for free on Wednesday, May 23. The first book I was allowed to change because I bought it less then 14 days ago. And for the second I used a coupon I got with the book Groeten van Rottumer plaat, which I got for free for enlisting myself to some email list, because this book was also one of the books you could choose from. The coupon gave you the right to exchange the book. The two books I got from the sale are: Both costed € 2.50. These where the two books I liked most, but I probably would not have bought them, would I not have wanted to get rid of the other books.

I received the two booklets that I ordered last week from JOOT BOOKS Just Out Of Time which are related to expositions of Peter Struycken. These are:

I went to bookshop Kruimeltje, where they had a sale: 50% of for all the books on the second floor. I went to look at the books they had about Harry Mulisch and I selected the following two (prices after reduction): This months interesting links
Home | May 2012 | July 2012 | Random memories