Around 11:10 this morning, I colleague remarked that there was some snow outside. I indeed saw some small specks of snow. A little later, real snowflakes were falling from the sky, but none of snow stayed on the ground.

Last Saturday, I read a story on Slashdot about the book 10 PRINT CHR$(205.5+RND(1)); : GOTO 10, which is about the one-line Commodore 64 BASIC program given in the title that generates random diagonal mazes. Watch this YouTube movie about the execution of the program. There are two ways to interpret the generated pattern. I looked at the light blue lines as walls. Below, I have given a similar output, but with a non-random border around it, where the walls are drawn in black on white background. (A new one will be generated on reload.)

When I saw this, I almost immediately asked myself, what would be the average length of your walk when you would land somewhere? There are many short walks, but also some much longer walks. What would be the length if the image was infinite in all directions? Could you land in an infinite walk? I paged through the book (which can be downloaded freely) and did not find any of these questions being addressed.

You can also look at the dark blue parts as walls. Below gives some output where the light blue parts are made in much wider pathways and there are walls added on the side.

Now you could ask yourself the question of what is the chance that there is a path from the top to the bottom for every given height with a given width. Of what is the chance if you start somewhere on the top, you can reach the bottom? When I posed some of these questions on Slashdot someone mentioned percolation theory.

Below a random labyrinth is given, where there is always a path from the entrance at the top to the exit at the bottom. The inside is purely random and a new one will be generated on each reload of this page. At first it might sound surprising that this is the always the case, but once you realize that there are no splits in this mazes (and thus would be called a labyrinth by many), it must be the case that starting from the entry you must arrive at the exit somehow.

If you create another pair of exits on the sides of the mazes it must be the case that if you enter from the top, you must exit at one of these exists. Through the other exit on the side you always arrive at the exit at the bottom. (You can never arrive at the bottom, because that would mean that the exits at the sides are connected and that somehow the two walks must cross some where.) In a sense this is much like the basic unit of this random maze. This means that each diagonal bar from a maze can be replaced by a random labyrinth with four exits. Below six smaller random labyrinth are give that could serve as building blocks. This suggests that there is some scale invariance at play. This may also hint at some of the other questions I have been raising.

Today, I finished reading the Dutch translation of Children of Dun by Frank Herbert, which I started reading on November 11. The day before, I bought the book from bookshop Kruimeltje for € 5.00. This is the third time, I read this book, but to my knowledge, the last time was more than thirty years ago. What I liked most about the book is the intricate plot where multiple (groups of) people are making plans to gain (or keep) power, and how all the plot develops. I was a little dissapointed about the last two chapters. The last chapter I found rather pedantic. I found the manner in which Herbert finishes the story in the forelast chapter not very subtle. What I remember from the miniseries that was based on this book, is a far more elaborate ending.

During the night about 1 cm of snow fell. But it did not stay everywhere on the ground. During the morning there was a little snow. At some place the snow stayed during the day. More snow is predicted for the coming days.

In the morning, it snowed again. At the office, we saw the snow fall almost horizontal due to the strong wind. It snowed quite strong for some time and the snow did stay after some time. During the afternoon, some of it melted again. 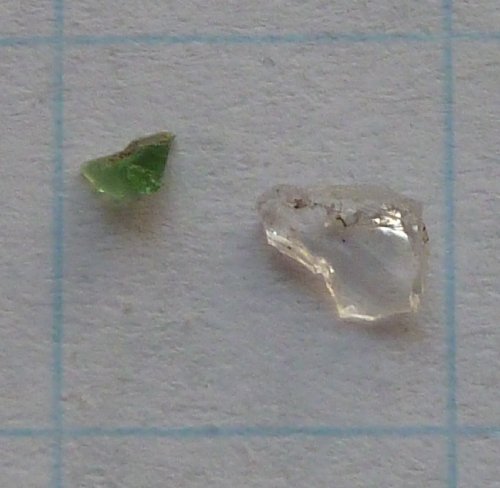 I got a flat tire while biking into the city. Here a close-up photograph on a 1cm grid sheet of paper of two pieces of glass that I found in the outer tire. I found a hole matching with one of the glass made holes, most likely the one that the white piece of glass came from.

Today, is again one of these special dates: A same number date. It is also twenty years ago that Li-Xia and I started dating.

The Hobbit: An Unexpected Journey

This evening, I went to see the movie The Hobbit: An Unexpected Journey with three colleagues of mine. We watched the movie in the new HFR format. Some people report that they are annoyed by it, but I did not. I found the first part a little boring, thinking that I would not want to see the remaining two movies. In the second half of the movie, I felt that the story finally got off, making me want to see the other stories as well, not in the first place because of all the action, but because of the drama. I cannot remember having read the book myself, so I could not judge to what extend the movie was true to the original story. At home I did check some parts a Tolkien lexicon. I had never heard of Radagast the brown, but he proved to be a real character. However, I found him riding on a sled pulled by rabbits a little a little out of place.

The limited sale at bookshop De Slegte is only 30% off for the price for which the books were sold first. As far as I can remember reductions where always at least 50% and often books were sold for ridiculous prices. For me this is one more sign that De Slegte is changing into a regular bookshop under the control of the new owner. I bought the book De schoonheid van de man (The beauty of the man) by Florence Ehnuel (ISBN:9789023435938) for € 5.99.

When walked to the entrance of the nursing home, Li-Xia seemed to recognize me, because she stood up and/or walked closer to the window. It has been a long time ago, I saw her do this. She was still in her pyamas because she was going to have a bath in a Snoezelen room. Around half past nine, I walked with her and two people from the nursing home to the bathroom where there were only coloured lights. Furthermore there was a nice smell in the air and there was soft music being played. She was lifted in the bath with a lift attached to the ceiling and which can move freely in all directions. The water was a body temperature. First they washed her hair and then they switched the ultrasone cleaning on for 10 minutes. And after another 10 minutes in the bath they lifted her out of it and we dried her and put on her clothes. Back in the common living room her hair was dried. It was nice to do this with Li-Xia who seems to enjoyed it very much. I stayed for tea and a oliebol, a traditional Dutch treat for new years eve. Before I left, I also bought some of them downstairs where they had baked three thousand of them.