I received four magazines with some article about Peter Struycken in the mail which I bought from Artentique for € 17 including shipping. These are: I discovered that I already have a copy of the last magazine.

The article by Johannes van der Wolk has some interesting tables with respect to Komputerstrukturen 4 and 4a. I checked these tables by adapting the scripts so they would return compatible data. I discovered only one little mistake. The last line of the second table should read the numbers "10 21 82 - - 9 3" instead of "10 23 80 - - 9 3". This table does include the count of 2 for code 14, which is refers to as 'module 4' in the article, for the second group of five columns (of two wide). The author notices that the distribution used in Komputerstrukturen 4 and 4a is very similar except for the fact that different codes are used. In the third table he gives what he thinks was the input distribution that Struycken used. But this does not match with the input as described in P. Struycken from 1976. He does report that there is an error in the reproduction of Komputerstrukturen 4a in P. Struycken komputerstrukturen from 1970, where I did find ten errors.

I received some materials with respect to Peter Struycken, which I ordered from André Swertz Antiquarian Booksellers. The consist of a calender and some invitations. In more detail in order of date:

The 10 day ensemble predictions of the Royal Netherlands Meteorological Institute for today predict some snow in the first half of next Tuesday. The image on the right is showing the relevant parts of the temperature and precipitation scales. The temperature will likely be below zero during that day, but not for sure.

Lately, I have been thinking about an application for manual Structure from Motion. Today, I came along The CImg Library for image manipulation and also OpenMesh: a mesh implementation based on half edges. This is maintained by Computer Graphics Group at RWTH Aachen University. I discovered that they are also doing some research on image localization using Structure from Motion. Some code can be downloaded, but only for Linux. Then I found the Open 3D City application for manually modeling a city in 3D from arial pictures. This evening, I downloaded the program. It looks much like what I have in mind, but it only works on one fixed data set, which is downloaded from a website, and it works with solids, not a triangular mesh, as I had in mind. I watched the instruction movies (they are in German, but I have no problem understanding that language) and played a little with, to discover that it is not easy. 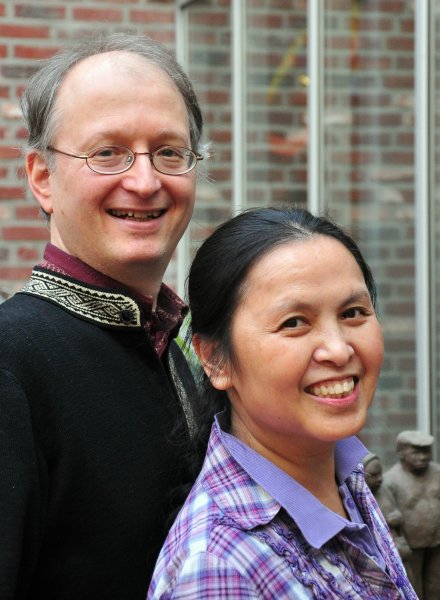 Paul van Norden, an old friend, visited us at the nursing home. Li-Xia had to laugh a lot. We also walked around the building and Paul took some pictures of us. (More of his pictures can be found on his website.) On the right is one taken in the roofed 'garden' in the middle of the building. Li-Xia likes this place for some reason. She often walks around and looks at her reflection in the large glass windows. Communication with Li-Xia has become more and more non-verbal. Talking has become almost useless, also because she mumbles in Chinese mostly. But she still speaks with her face and I have become to know her in a new way, understanding her needs and moods better and better.

At 16:56:17, I bought the following items during the winter sale of Bookshop Broekhuis:

Yesterday evening we got a little snow. During the night and the morning there was some more light snow. More snow is coming for tomorrow as predicted last Friday, but it seems it is only going to fall in the Southern part of the country and maybe we do not

Lots of snow this morning in the Netherlands, leading to a record traffic jam of 1007 Km on the highways. Especially in the South and West part of the country there was a lot of snow. I measured 3.4&plusmin0.3 cm of snow around quarter to ten in our back garden. It continued snowing till the evening. Around six o'clock in the evening, I measured 9 cm of snow. Because temperatures will remain low the coming five days, the snow is expected to stay for some time.

Lately, I have been thinking again about developing an application to create 3D models from 2D picture/images, with a focus on manual modeling with support from Structure from Motion methods. The idea is to draw polygon meshes on the 2D images and generate a 3D model with texture using reverse ray-tracing, possibly taking into account shadows and automatic fill-in for parts that have been covered. The closest existing (commercial) application is ImageModeler™ from AutoDESK®, a free extension for their various modelling packages. PhotoModeler is another commercial application which performs Structure from Motion and allows you to draw polygons based on the results to create a 3D model. An open source application that is very similar to this is Insight3D (which I tested in November 2011). You can also add your own feature points, but the interface is somewhat clumsy. And the last application that I want to mention is Open 3D City, which I investigated last Friday, allows you to draw solids based on images that have been aligned through Structure from Motion. A could document for the techniques and algorithms behind this all is Visual 3D Modeling from Images by Marc Pollefeys. I wonder what would the best approach to continue this project: modifying Insight3D to my needs or starting from fresh taking the code of the MySample editor as a starting point?

The polygon meshes (most likely triangle meshes) drawn on different images should be connected with each other. It should be possible to have multiple meshes. Not every mesh has to occur on each image and if one does, it should be possible to enable/disable it per image. At most one mesh is active at any time, and edit operations are performed on this mesh. One would start a new mesh on one image. First very basic. Next one would copy this mesh on another image. For this one need the notion of an active vertex of a mesh, which is the last vertex selected. In this way vertices of the mesh are linked between images. Once this has been done between a number of image, it is possible to start a Structure from Motion algorith and estimate the 3D coordinates of the vertices and the relative location and direction from which the images where taken. There are various ways in which a mesh can be editted. One could add a new triangle on the outside. In this case the new vertex needs to be copied to one of the other images. But once that is done, it is often possible to estimates its location on the other images. One could also create a new vertex inside an existing triangle and divide the triangle in tree smaller triangles. In this case one could assume that the new vertex is in the plane of the original triangle, and place it accordingly to the other images on which the triangle is visible. Most likely some difference should be made between vertices that are placed on an image by the user and vertices whoes location has been estimated. Of course, when more and more vertices are added, it is possible to generate a better estimation. It could happen that estimated location of a vertices differes from its given location on a certain images, maybe because of a mistake made by the user. Maybe it should be possible to visually mark such possibly misplace vertices. When one is positioning a vertices, it might be handy to mix the image on the connected triangles with the contents of those triangles on the other images, as to better judge the optimal location. (As an alternative, one could also change the brightness to the degree that it matches with the other images.) During such an operation it could be helpfull if the edges of the triangles and the mouse cursor are hidden.

This morning, I went to Amsterdam, because in the evening my employer was giving New Year's reception with a dinner. I first went to bookshop De Slegte and bought the book Geluid <=> Kijken: drie audio-visuele projecten = Sound <=> Sight: three audio-visual projects by Ton Bruynèl, Dick Raaijmakers, and Peter Struycken for € 20. The book contains a program listing of the program used by Struycken and also three record singles. At JOOT Books, I bought kleur, ruimte en verandering = colour, space and change by P. Struycken for € 8 and Kunstopdracht P. Struycken, Expeditie Knooppunt Post Utrecht for € 10. Furthermore, I went to the bookshop of Mendo, Bookshop Xantippe Unlimited, and Boekie Woekie, a bookshop that sells books by artists. Quite interesting, but I did not stay long. While walking to square called Leidseplein, I also went to bookshop Scheltema/Selexy, where I looked around the computer science and mathematics department. In the afternoon, I went to the library of Stedelijk Museum Amsterdam, where they have a large collection of books about modern art. I requested for many books and materials. I took many photographs of these, so that I can study them at home. At the end of the afternoon, I went to gallery de Expeditie. They have many artworks by Peter Struycken, but not on display. I talked a little with some lady, who also gave me some invitations of previous exhibitions of Struycken.

Yesterday afternoon, it started to snow again, mainly drifting snow. This morning, I measured 9 cm of snow on a flat table in our back garden. During the day it continued snowing with drifting snow, sometimes stronger, sometimes less. I guess another one or two cm of snow fell.

This afternoon, I went to bookshop Broekhuis to look at the winter sale where all books are 75% off the original price. I also went to look at third floor where Miguel Dominguez was working on one of his chairs. I talked a little with him. He is making art works out of old forniture. At 13:58, I bought the book Surreptitious Software: Obfuscation, Watermarking, and Tamperproofing for Software Protection by Christian Collberg and Jasvir Nagra, ISBN:9780321549259, for € 12.95, which is with 75% off.

This afternoon, I downloaded and played the first person adventure computer game Dear Esther. In a sense it is a very boring game, because there is not much to do. No puzzles to solve like in Myst. But I still found it a very interesting experience and I probably want to play it again. It is much like an interactive movie. It took me about one and half hour to finish the game. I somewhere read that the average game play is about three hours. But I guess, I am a little experienced in finding the right path, and I also might have missed some parts. I wrote down a game record, like I did for other games I played, but I am not sure if I am going to publish it, because it is not really like a game that you should do this. The only point of criticism I have, is that there is no option to replay the narrative that is being played at certain points in the game. As a non-native speaker, I would like to reread the text to fully grasp it. If you don't want to buy the game, you can also watch a full playthrough on YouTube. But I am glad that I bought the game, because it will support the producers in creating similar, maybe even more engaging, games. This months interesting links
Home | December 2012 | February 2013 | Random memories