Today, some interesting developments in the Deventer murder trial were announced. A team of the police has been researching the case again. They found two pieces of evidence suggesting that Mrs. Jaqueline Wittenberg was murdered on Friday, September 24, 1999 and not on the day before. This would rule out Ernest Louwes as the murderer because he has an alibi for that day. (Many years ago, some lay person already had concluded based on the report of the state of the body when it was found, that it was very unlikely that she was murdered on September 23.) Moreover, forensic doctors say that based on all available photos and research material there are indications that the body has been moved 6 to 24 hours after the murder. This would mean that someone has been on the crime scene before the body was found. (It was already known that the body was moved from, most likely, the hall to the living room before the picture of her late husband. Some lay person has concluded that the seven stabbing wounds were made after the body was moved.) There is also mentioning of new perpetrator knowledge was discovered. The details of this are not revealed. (This could point to an other suspect that is being investigated at this moment.)

In addition, the investigators discovered a crucial mistake regarding the phone call that Louwes made to his client, the victim, on the evening of September 23. Louwes declared that he made the phone call 'on the A28, near Harderwijk'. But in the police report this was mistakenly interpreted as a call from 't Harde, which is a difference of at least 8 kilometers. This also invalidates an important statement by expert witnesses with respect to the possibility that the phone call was picked-up from Deventer. Faced with this new information, expert witness J. Rijnderslaan from KPN Security, has retracted a rather incriminating statement against Louwes, and he encourages other experts to do the same.

Since last Thursday, bookshop Broekhuis is giving 75% off on all books at the former Polare / De Slegte location. But often it is even more, because the prices are rounded down. At 17:56:22, I bought the book Jaloezie by Catherine Millet, ISBN:9789023462774, for only half a Euro. 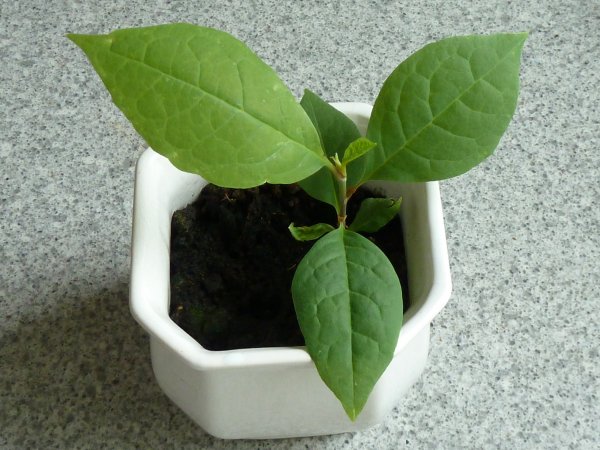 In the past week the sixth and seventh leaf of the little magnolia plant have become fully grown. The start of the eight leaf is already visible. The leaves are becoming bigger and bigger, but still only half the length of an average leaf on the mother tree.

I decided to have a look at Tetem and I discovered that the 'Finals AKI 2014' exhibition was held there, and in the AKI ArtEZ building and 21Rozendaal. At Tetem, I saw the works of, among others, Mercedes Marin and Pauli Beutel. In the main building, I:

I also visited 21Rozendaal, the last of three places where the finals exhibition was held. There I watched the movie "Part of the Empire/Plague" (trailer) by Jeffry Spekenbrink consisting of time-laps fragments for which he composed the music. In this sense it reminded me of Koyaanisqatsi. I also looked at the book "Showing my father the world" by Gunter Gruben from a project with the same title. I fear that there is only one copy of the book.

Today, it was the last day that books were sold (with a 75% discount) at the location of the former De Slegte bookshop. In the last half hour before they closed at 4 PM, I looked around, seeing if there was any book that I still would like to buy, but I could find non, not even when I was told at the end, that I could take some for free (because I had been such a frequent customer). I think, it was because I already had bought all the books that I did find interesting in the past months. At the moment, I have a whole stack of books that I still need to put in my bookshelves. They have to leave the shop empty by July first, and someone was already busy with taking down the shelves along the walls and not without making some loud noises.

I try keep track of our gas usage and milages. For this purpose, I always fill up the gas tank and note down the distance we travelled. Our car also has a milage indicator but it is not always very reliable. Last week, Annabel got some gas, but she did not fill up the tank, because the price was quite high. Now I don't know how much gas was used during both periods. But I can use the readings from the milage indicator to make a good guess. Annabel filled 20.02 liter of gas and noted down a distance of 586.5 Km with a milage reading of 15.6 Km/l. Yesterday, I filled 35.55 liter with a distance of 309.6 Km and a milage reading of 16.0 Km/l. The total distance traveled is 896.1 Km and the total gas is 55.57 liter, which gives an average milage of about 16.1256 Km/l. The weighted milage according to the indicator is equal to (15.6 * 586.5 + 16.0 * 309.6) / 896.1, which is: 15.7382 Km/l. This means that the reported values of the milage indicator have to be multiplied with 1.02461 to arrive at an estimation of the true usage during the given periode. This results in an estimated usage of 36.69 liter of gas during the first periode and 18.88 liter during the second periode. These add up to 55.57 liter for both periodes. Yesterday, I paid € 61.47. But taking into accound the estimated gas usage during the last periode, it means that actually only € 32.65 was used. The remained has to be added up to the amount of the first periode (€ 35.42) resulting in € 64.24. Now I can use these numbers to calculate how much Annabel has to pay for gas that she used during both periods based on the administration that we keep, assuming that she agrees with the above calculations, of course.
Home | May 2014 | July 2014 | Random memories