This morning, I finished reading the Dutch book Het slimme onbewuste (translated to English: The clever subconscious mind: thinking with feeling) by Ap Dijksterhuis, which I started reading on November 22, the day I bought the book. I find it an interesting book. I must notice that I just read that some of the results are questioned by some scientists who failed to reproduced the results. But that is often the case this type of research. The central claim is that the unconscious is often smarter than the conscious, which is also known as Unconscious thought theory. It seems that we unconsciously perceive more than we are aware of. It seems that subliminal influencing is not to truly possible. An unconscious opinion seems less subject to changes than a conscious (or made aware) opinion. I think this might have to do with a conscious opinion is subject to development. Also, I doubt if it is true that the media have a strong influence on our subconscious opinion about, for example, immigrants, as claimed. It also appears that the subconscious is better at making judgements for complex problems involving many variables, while the conscious is better when there are few variables. It also seems that if you give your subconscious mind some time to think about a problem, it comes up with beter solution or ideas then when you consciously think about it. Finally, the book discusses the experiments done by Benjamin Libet, which seems that the decisions to perform a certain act are done by the subconscious mind and only later announced to the conscious mind just before they are done, and that the idea that acts stem from conscious decisions is based on an illusion. But what then is the role of the conscious as that seems to have so little influence? That just seems to be controlling and to exhort the subconscious to make a better choice the next time, which unfortunately does not always seem to work.

Yesterday, two colleagues and I went to "The Hobbit" marathon at Wolff Cinestar in Enschede. There were some technical issues with the first movie, resulting it being shown in 2D instead of HFR 3D. There also seemed to be an issue with the color resolution resulting in some solarisation like effects, especially in a band at the bottom of the screen. The last movie, The Battle of the five armies, started at forthy past midnight. I was not very impressed by this movie as it seemed to lack the magic and/or drama of the other movies. Maybe watching already having watched movies for five hours also contributed to the experience.

Yesterday, I also finished reading the Dutch translation of The Hobbit by J.R.R. Tolkien, which I started reading last Saturday.

I finished reading Susan Sontag: As Consciousness Is Harnessed to Flesh, Journals & Notebooks 1964-1980, which I started reading on October 19, the day after which bought it. This second volume was much like the first. Again a mixture of very different material, most of it difficult to comprehend but some very revealing parts. Again, the editor has added many clarification in the running text, which I prefer above footnotes. A found it a pitty that he only included fifty of the 228 entries of good movies that Sontag has compiled. The second entry in the list, which is not in order, is 2001: A Space Odyssey. It would be nice to have a linked version of this book, because of the large number of persons, movies, and books that are mentioned.

I am thinking about installing a PV system on the roof of our house. It is possible to get a cheap loan from the goverment. But today, I decided to calculate wether it would be cheaper to use our savings taking into account taxes that we have to pay. It turned out that the loan was not that cheap after all, alse because of some additional costs for getting the loan. I wrote some JavaScript to perform the calculations. The results are given in the table below. This does include a column for expected return from the energy produced by the system, but the values there have no effect on the difference in the last column.

Today, I received the catalogue of the exhibition called after Harold Cohen that was held from November 25, 1977 till January 8, 1978 at the Stedelijk Museum Amsterdam and which I visited on January 7, 1978. It contains the translation of a talk (kind of interview) between Harold and Becky Cohen, that they gave during at Documenta 6 in Kassel during the summer of 1977.

This evening, I finished reading the book F**k it: The Ultimate Spiritual Way by John C. Parkin, which I bought on December 6 and started reading on December 15. I was struck by a paragraph on page 29, which reads: And I still remember that new feeling I had that day. In the dark despair of the living pain I was feeling I could also feel a freedom I had never before experienced in my life: it was the freedom of nothing mattering. In my nihilistic gloom I was just daying Fuck It to everything. This sounds very much like a feeling I was having when reading The Conspiracy agains the Human Race some months ago. So, in a sense this books is a good continuation from that book. This is definitely an interesting book, although it also contains some crap, to which I simply said: Fuck It. In the longest chapter, Chapter 3, he talk at length about all the things you can say Fuck It to. I think it lacks a section with the title Say Fuck It to Depression. I guess that saying Fuck It only works when you have gone through an existential crisis. I see this books as another important book on my road to enlightenment. 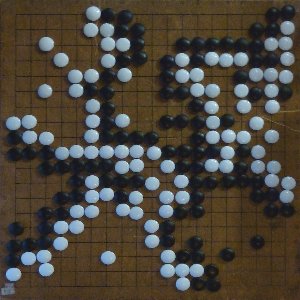 Snow on the way to Wintergo

When I left home, it was already snowing, but it was wet snow. I took the train to Nijmegen to go to attend Wintergo, a rather relaxed Go tournament held. When the train passed through Dieren, I noticed that the snow was staying. I already had hear that the train I was traveling with would not go any further than Nijmegen. I was an hour early, but when I noticed how much snow was falling from the sky, I decided not to look for some bookshops, but take the bus to the place where Wintergo was held. I was one of the first to arrive. The bus was having some trouble with the snow. Many were delayed, especially those coming from the South of the country. The first round of the tournament started a little more than one hour later than planned. I won, not surprisingly playing agains a weaker player, with about ten points, which could have been even more, if I had not played an overplay move (a greedy move that is hoping for too much).