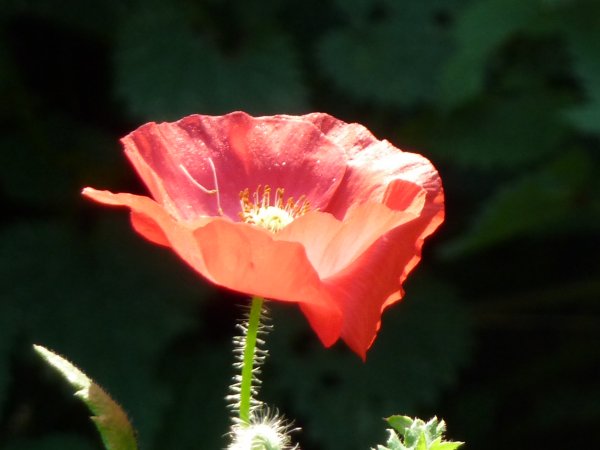 Today, I went walking near De Lutte. Temperatures were around 20° Celsius, which probably is a record for this day around here. It is very likely the warmest birtday I ever had. We found some common poppy flower (Papaver rhoaes?) along the road, which is a little rare during this time of the year. I also took a picture of cobweg on the grass reflecting the light of the sun and a picture of some fungus with some alga on it. Below a typical picture of the landscape around De Lutte. I also tested GPSLogger for Android from Mendhak on FJFgalaxy, a Galaxy Tab 3, while keeping it inside my dark green UPPTÄCKA backpack from IKEA. In the evening, I cleaned-up the the track a little (and later added some hand drawn lines for the walking). The result in Google Earth: KML file or in Google Maps.

At 14:43:29, I bought the following three books from bookshop Broekhuis: 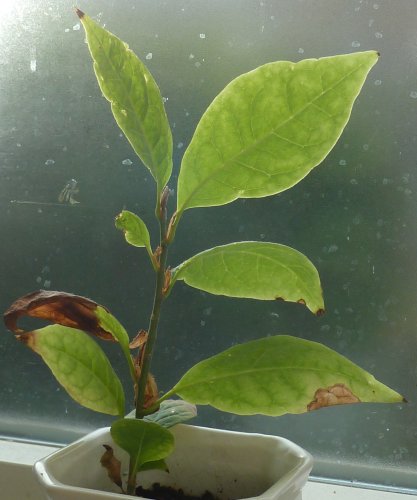 This morning, I took a picture of our little magnolia plant. In the past months it did not grow any new leaves and it seems that the leaves are withering. The leaves that have turned brown did so a long time ago, maybe because I gave it too much water. I have decided to keep the plant inside this winter hoping that it would just continue to grow, but it seems that although it is not exposed to cold it seems to responde to the lower levels of light in the winter time.

Yesterday evening, I read The Essence Language, version 2, which was pointed to by someone involved in the project when I made some reference to the knowledge enginering level in Four levels of modelling of information systems. The ideas in Essence (as the authors state) are very similar to metapatterns, a method for conceptual modelling by Pieter Wisse, as he argues in In search of difference and Beware of the plagiarist!. I should note that these rebutals seem to refer to version 1 of the Essence Language and that it is possible that version 2 (and the once planned version 3) transcent metapatterns. The Essence project has been terminated and most of the documents are no longer accessible. I found The Essence Language, version 2 rather difficult to comprehend because it is a language definition and from the definition it is not immediately clear how it should be used. Later, I found Essence taaldefinitie en denkwijze, the description of the first version of the language in Dutch. This is much accessible because it also gives examples of the usage of the language.

On closer inspection, I concluded that this form of concept modelling is something different than what I called knowledge enginering. First of all the knowledge enginering that I was talking about is on the instance level not on the concept (or type) level. I am talking, for example, about the problems that arise when two independent source use different ways to identify shared objects and that a matching should be explicitely stored to be able to correct mistakes if they are discovered. In the document about the first version of Essence there is a section that talks about merging of concepts. However, they there is no mechanism to specify on which ground the merging was based. Which in fact is a little surprising in a formalism that gives such a strong focus on the ground and context of concepts. It show again, that this form of two level reasoning about statements, is difficult to grasp.

Yesterday, Meindert asked if I knew how to assign students to projects based on preferences. He had 28 students and seven projects and wanted to assign four students to each project. Yesterday and tonight, I spend some time developing a page using JavaScript to implement two algorithms for doing this.

This morning, I received the book Waarom de wereld niet bestaat (Why the world does not exist) by Markus Gabriel as a present from Meindert. This evening, I discovered that Gabriel Vacariu claims that Markus Gabriel plagiarized his ideas. This afternoon at 15:07:45, I bought the novel Een vlucht regenwulpen (Flight of Curlews) by Maarten 't Hart from bookshop Broekhuis for € 12.50. The book has an autograph of the author.

Why the world does not exist

This morning, I decided to stop reading the book Waarom de wereld niet bestaat (Why the world does not exist) by Markus Gabriel at page 119 and send the book back to Meindert. I started reading this book a week ago. I believe that Gabriel comes to his strange conclusions, for example that the world does not exist because of the way he defines things in a rather simplistic matter. It seems he presumes that there is but one kind of existence for both things in reality and ideas in the mind.

This afternoon, I visited Tetem. I was quite impressed by the exhibition Impulsief with works from various artist from a number of private collection. For pictures about the works and the opening download this ZIP-file. I was most impressed by the following works:

This morning, a copy of Untitled Harsh Noise Graphic Novel by Cementimental arrived in the mail, which I had ordered from Lulu.com. The book has 300 pages. The only text on the front and the spine is the word "Cementimental". On the last page it has the number 415520-546817 below a barcode. On Lulu.com it says: "Harsh Noise album in paperback form. Pixel noise art generated using various generative and/or expressionist processes in the ancient Mac software LightningPaint." On Cementimal's page about the book it reads: "Surrealist book-object; harsh noise album in paperback form. 300 pages of pixel-noisescapes, created soley using the antique mac paint app LightningPaint." LightningPaint is shareware replacement of MacPaint for the Apple Macintosh. It can still be downloaded. It was written in Lightspeed C

I had a lucide dream this morning. It is a very long time ago, that during a dream I realized that I was dreaming. Usually, it is in a kind of nightmare dream, and when this happens, it usually means that I woke up. But this morning, I wanted to go outside, but it was raining. Then I thought about how the rain would stop if I would think it away. Just a little later, I realized that I was having a lucide dream, and I thought about how I could now change everything in my dream, but I felt that it was not proper to do. I cannot remember what happend next, so I guess I continued sleeping. It was only some time after I woke up that I remembered having had a lucide dream. I do not know why is happened. Maybe it is related to me reading a book about the unconscious mind or because I was shortly awaken by my Klockis going of at 6:15.