Cause of the second wave

When I saw the graphs about the clusters of COVID-19 infections in the past months in COVID-19, Tweede Kamer briefing, Update Tweede Golf - II, 29 sept 2020, the presentation with the briefing to the Dutch parlement, it gave me some ideas how the cause of the second wave of infections. This morning, a news report with a statement from the RIVM, affirmed these ideas. It were primarily young adults (18-25 years) who going on holiday to Spain and the south of France during August, who became infected in August. Then at the start of September the infection spread further through parties and student dorms. Through them also their parents got infected and from there is spread further to the nursing homes. The number of infections has been doubling about every two weeks. It is only the last two weeks that the number of hospital admissions has been on the rise. This week is also was announced that about ten thousand people died during the first wave. The average age was close to the life expectancy.

I discovered that on July 13, 1979, I visited the offices of NASCOM microcomputers that developed and sold the Nascom 1 and 2 single-board computer kits. I had a random memory about bringing some eggs to an address while staying in Watford. I found some note of this in my diary V (written in Dutch) on page 72, where it mentions the name and the address of the company. (The address is mentioned in an ad in Personal Computer World of October 1979.)

Last Thursday, I came along the article Computer Scientists Break Traveling Salesperson Record, which is about the report A (Slightly) Improved Approximation Algorithm for Metric TSP, which gives a slightly improvement of the Christofides algorithm. In the discussion on Hacker News, I found a reference to TSP-SA : Traveling Salesman Problem Solver using Simulated Annealing Algorithm. I spend some time, using this for the program I wrote to find the best AKI Mupi route. The solutions it finds are close to the shorters solution I found, but not very close. In the discussion on Hacker News there was some confusion about the presented result in the paper as it seems there are enough algorithms know that find much better approximations than the one reported in the paper, missing the point that the paper is about a theoretical result. Finding a near optimal solution with a program is one things, but proving that a given algorithm is always within a certain bound of the optimal solutions, is something completely different. 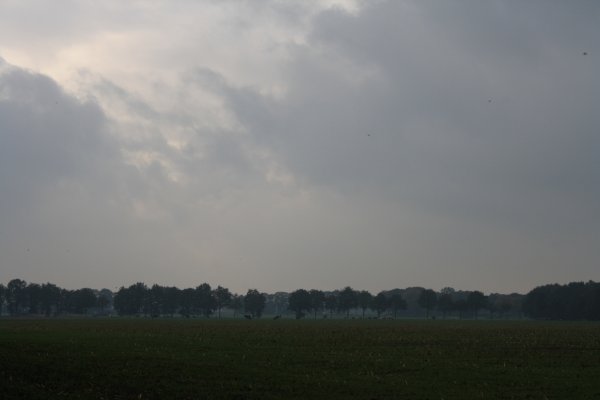 Walking and some border poles

Conny and I went walking around the Groot Bruning estate. Yesterday, it was sunny, but today the day started with fog, which changed into a grey sky. We found may mushrooms of all kinds in the forrest. The cows were still in the fields. Conny took a picture of the grey sky above the fields. Next we biked to the border, to check if we missed some border poles in some area. We found the following border poles: The first two we had seen before, but the last was a new find.

Conny and I went to Drents Museum to see the exhibition Henk Helmantel - Master Painter. We had tickets for a time-slot in the afternoon. So, we first went to visit the Westerbork Synthesis Radio Telescope. We started at the parking place of the National Westerbork Memorial and followed the path with models of the planets (including the minor planet Pluto) and the sun on scale of their (average) relative distances. This path ends at one of the end of the row of radio telescope.

At the Henk Helmantel - Master Painter exhibition, I noted down the following works in the order I saw them:

On the way home we went to the village De Kiel to visit the point where seven marken are joined. In 2004 a new stone was placed at the location where the original marke stone used to be. During the French period, there were no farmers who wanted to claim the area, which was surrounded by seven marken, namely: Westdorp, Ees, Odoorn, Sleen, Zweelo, Westerbork and Rolde. A land surveyor from the Land Registry under the command of Napoleon divided the land among the seven surrounding marken. The seven border lines are still visible in the landscape. The road is on a crossing of six roads, which are on six of these border lines.

It is the first time in at least a month that I visited the city center. At Fotogalerie Objektief I saw the exhibition Beautiful world with photographs by Donny Scholten-Coelet and at Concoria I saw the exhibition Wayne Horse - May all your dreams come true. At 15:38:21, I bought the book Veldnamen in Enschede written in Dutch and published by Uitgeverij Van de Berg in 1992, ISBN:9070986888, from bookshop Broekhuis for € 19.95. Alongside the book also a set of maps.

I have been working on a program to generate books with PARR patterns. Nowadays, there are many sites that can print books on demand with all kinds of options with respect to quality of the paper and means of binding. All you need to provide is some PDF files. I spend some time figuring out if I could use (La)TeX to generate a PDF. It proved not so easy, as I wanted to have one PARR pattern on each page, exactly aligned. So, I decided to use PostScript and convert it to PDF. (There are tools for combining PDF files.) The program tries to generate an interesting set of PARR patterns (for a given number of lines and points). It does this by avoiding patterns that are symmetric and combinations of patterns that are very similar. It also tries to find a printing order in which similar patterns do not appear close to each other. Everytime when the program is ran, it generates a new set of PARR patterns. This months interesting links
Home | September 2020 | November 2020 | Random memories